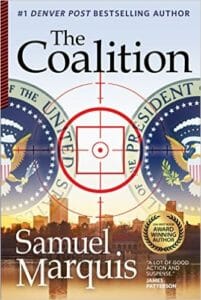 Samuel Marquis is a VP-Hydrogeologist with an environmental consulting firm in Boulder, CO. He has interests in both historical and modern suspense. Marquis will be publishing six books in 2016, the first of which is “The Coalition,” a tale about a secret society whose plot threatens the highest levels of the U.S. government. In “The Coalition,” Marquis said he dug into the shadowy areas of political extremism.

“My primary goal in writing a suspense novel is to tell a compelling story,” said Marquis. “At the same time I also tend to address important social issues. My novels always have three to six major point of view characters, so whatever issue is at stake is handled not by me as the omniscient author but through the POV of the major characters. ‘The Coalition’ tells the story of a shadowy right-wing group as it orchestrates a political assassination and then tries to install its hand-picked presidential candidate.”

Marquis added, “More than addressing social issues or taking an ideological stand, I want people to root for the underdog. All of my books feature underdogs, iconoclasts, and sympathetic villains that are torn up inside on account of the havoc-causing decisions they are forced to make.”

The novels Marquis writes feature areas of particular research interest to him. “As a professional hydrogeologist, scientific expert witness, and history buff, the subjects that I enjoy are the Golden Age of Piracy, the Plains Indian Wars, World War II, the modern War on Terror, and geology/environmental science. I go out of my way to show both sides of the issue and make my villains well-rounded and plausibly motivated characters.”

“Culture Wars” have always intrigued Marquis. He said he sees Colorado Springs as “The Vatican” of modern evangelism and the Christian religious right. He wanted to show how this power center is flexing its political muscle within the Republican Party. He said, “So, I wrote a book about a shadowy, cleverly diabolical group, The Coalition, comprised of America’s most prominent conservative leaders, as they try to pull off a modern-day coups d’état. Their goal is to install their perfect, hand-picked candidate, the first female president in American history.”

For Samuel Marquis, 2016 represents a year of change. “I’m publishing six books in 2015-2016 because I have a backlog of professionally edited novels. I have been at this for a few years and have had two New York literary agents, but my father died last spring and my new motto is ‘I Ain’t Wasting Time No More’ in honor of the legendary Allman Brothers’ song. In keeping with Greg Allman’s mantra, I’m not going to wait around for the industry gatekeepers to get their act together and realize I have something important to say.”