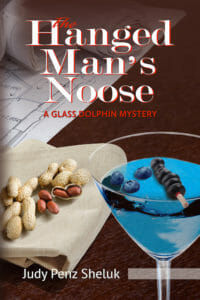 Judy Penz Sheluk’s debut novel, “The Hanged Man’s Noose,” is the story of Emily Garland, a freelance writer/journalist, and her friend, Arabella Carpenter, the owner of the Glass Dolphin, an antiques shop in the small, historic town of Lount’s Landing. According to Penz Sheluk, “Arabella’s motto is ‘Authenticity Matters.’ That philosophy is the underlying message in everything I write.”

When asked why authenticity was important to her, Penz Sheluk said, “There’s a quote by Khaled Hosseini (The Kite Runner, A Thousand Splendid Suns) where he says, ‘And that’s the thing about people who mean everything they say. They think everyone else does too.’ I’m that person. The one who thinks everyone else does, too. And you know, I’m okay with that. Because to me, authenticity does matter. What you say should matter. It shouldn’t just be rhetoric.”

Judy Penz Sheluk said “The Hanged Man’s Noose” started off as a short story assignment in a creative writing workshop. “As a short story, it wasn’t particularly good, but I loved the main character, Arabella Carpenter. I also loved Lount’s Landing, a town I created which was named after a colorful nineteenth century traitor.”

“I try to read at least one book a week, and one anthology or collection of short stories a month. Reading is the best teacher.”

The traitor was Samuel Lount, who was hanged for treason in Toronto, Canada. Penz Sheluk added, “On Christmas Eve 2012, I decided to expand the story into a novel. That took another year and a whole lot of revisions, and in the end, Arabella became the sidekick to Emily Garland, the protagonist. But I still love Arabella. I’m currently working on the sequel to ‘The Hanged Man’s Noose’ where Arabella will be the protagonist and Emily will be along for the ride.”

Penz Sheluk said she’s been an avid reader since she read her first Nancy Drew mystery. While she enjoys mostly mysteries and suspense, she also reads other genres. “I try to read at least one book a week, and one anthology or collection of short stories a month. Reading is the best teacher.”

Reading may be the best teacher, but writing doesn’t always make the best career discussion, as Penz Sheluk learned. “About ten years ago, my friend, who was a Girl Guides leader, asked me to speak to her Guides about being a writer on their ‘Career Night.’ I brought a few magazines with me, and a journal book that I used to jot down notes and ideas. I had this vision of inspiring a bunch of nine- and ten-year-olds to start writing.

“Unfortunately, the other guest that evening was a woman who custom-made dolls. That would have been tough enough competition, but this woman also made the dolls to resemble the consignor—same eye and hair color. Let’s just say it was a humbling experience and I don’t think I inspired too many kids to become writers!”

Learn more about Judy Penz Sheluk on her website at www.judypenzsheluk.com.