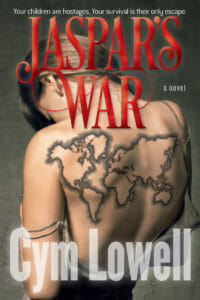 Cym Lowell is an author, an international tax attorney, a Vietnam veteran, and the founder of Operation: Next Chapter. Lowell founded Operation: Next Chapter to support the men and women who have made sacrifices in the line of duty. In this interview, Cym Lowell discusses his 2014 release “Jaspar’s War” and how he used the proceeds from that book to purchase voice-activated computers for wounded veterans.

Jaspar’s War is a thriller about financial bailouts after a market crash. Lowell said, “As a writer, I enjoy taking a topic of current newsworthiness, asking myself ‘what is really going on here?’, then putting characters into a context to make a thrilling story. In this case, the topic that had my interest was the financial bailouts after the most recent market crash. I always thought the money went to the bad guys. ‘Who could they be?’ I wondered.”

Lowell said he used two of his favorite characters to explore the bailouts. ”My intent was to tell a thrilling story as I explored the emotions of the characters. Jaspar is a socialite who must become a warrior to save her children from certain death, and Nulandi is a warrior who desperately wants to become a human being to find his own redemption. In the end, I suspect that what I am doing is exploring my own feelings about life as it evolves.”

A veteran, Lowell remembers the days when he returned from Viet Nam. “In my generation, we were spit on and called ‘baby killers’ when we came home. At the Vietnam Memorial, I can feel honor for those who gave their lives in service to their country. Whether politically correct or not, they were heroes in the tradition of all those heroes who paved our way to freedom with their lives and honor.

“When I can be of assistance to the heroes of today, it feels in my heart as if I am paying homage to my comrades who did not get to come home and have a life. Maybe this is all a process of the need for redemption I feel in my characters. Maybe it is also a means by which I can find that sense of redemption for myself. After all, as writers we can only write about emotions that we feel.”

One new way Cym Lowell is continuing his philanthropy efforts is with his next novel, “Molly’s Legacy.” Due out this year, Lowell is working with Patriot Paws and hopes to raise at least $27,000 to provide service dogs to veterans.

“I was blessed to have served in the military in Vietnam times and learned about life in such a context. All proceeds from my fiction go to help our wounded heroes. I have been working with Soldiers’ Angels to provide voice-activated computers for heroes who cannot use their hands, and have started working with Patriot Paws to provide service dogs.”

“I love and I have passion for everything that I do,” said Lowell. “I have been blessed in my life to have learned what it takes to build life from failure. I also have respect for forces in life far greater than me which propel us toward our own destiny. Call it religion if you like, or other life force, but it is there.”

Learn more about Cym Lowell on his website at cymlowell.com.