You are here: Home / One Step Ahead - Featured / Times Up is a sparkling debut for Janey Mack
Spread the love 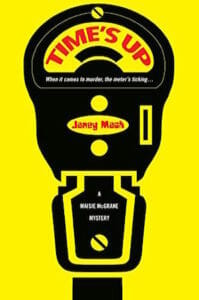 Maisie McGrane’s life dream of becoming a Chicago police officer is destroyed when the police academy expels her. Her family has a history of serving in the Chicago police and she was the top cadet in her class. Determined to make it onto the force, Maisie takes a job as a meter maid, which she reasons will set her up for a promotion in a year.

While despondent over her expulsion, Maisie seeks solace from her secret crush, ex-Army Ranger Hank Bannon. Their friendship turns into a hot love affair and Maisie sees hope for her future until she discovers the dead body of a City Hall employee. She’s determined to solve the murder despite warnings from her family to stay away from the case.

What Maisie wants most is to keep her nose clean until she can get promoted to the police force, but everything she does backfires. Even her career as a meter maid appears to be doomed when she and her partner put a parking boot on a limo that belongs to Chicago’s mayor.

Maisie’s confrontation with the mayor goes viral and soon the meter maid who wants to be a cop is catapulted into local stardom. With the mayor, several jealous Chicago officers, and a killer gunning for her, Maisie realizes the worst is yet to come—if she lives to see it.

This is a sparkling debut from author Janey Mack. Maisie McGrane is likable, engaging, and thoroughly adept at finding her way into trouble. The dialogue is crisp and the action nonstop as Maisie goes from one crisis to another. There are times when Maisie’s thoughts become a bit heavy-handed, but overall, this is a very nice debut and a bright spot for fans of funny mysteries with female protagonists.