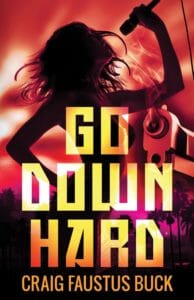 Craig Faustus Buck is an Anthony-award nominated author and screenwriter.  Among his six nonfiction books, two were #1 NYT bestsellers. For this interview, Buck talked about his latest novel, “Go Down Hard,” and the differences between writing for Hollywood and writing books.

As one of the writers on the miniseries V: The Final Battle, Craig Faustus Buck became familiar with deadlines and outlines. Not happy with the restrictions, he chose to take his Writers Guild Pension early. “I decided to pretend I was retired in order to write for myself instead of for studio network executives, many of them idiots. The freedom was enlightening. I stopped being a slave to outlines, as script work requires, and discovered seat-of-the-pants writing, which allows the author to create characters and then allow them to surprise him.”

Buck said that he enjoys seat-of-the-pants writing much more. “It’s a lot more fun, if inefficient, to write that way, and I think that joy and freedom can be found in my work. I hope my readers agree.”

“Go Down Hard” was originally conceived as a screenplay. Buck said, “When I decided to try my hand at crime fiction, I thought it would be an easy way to start, since I already had the story. However, in choosing to write a first person narrative, I essentially made the original story impossible to tell because too much of it required multiple points of view.

“So the story and characters of the original screenplay became relegated to backstory in the novel, most of it never revealed to the reader. Part of what I never used became the basis for my short story, ‘Dead End,’ which was nominated for an Anthony last year. That story, in turn, became the prelude to my novella Psycho Logic from Stark Raving Press. I’m continually recycling stuff I’ve written and cut or couldn’t sell. I just hope I’m not composting.”

Craig Faustus Buck describes “Go Down Hard” as a noir romp through the worlds of aging rock-and-rollers, live Internet sex shows, abusive psychiatrists, Slavic mobsters, child molesters, emotional betrayal, deceit, arson, murder and estate planning. With so many unusual situations and characters, Buck felt he had a prime opportunity to deal with a social issue.

“There is definitely a social issue buried deep in the heart of ‘Go Down Hard,’ but I’m afraid it would be something of a spoiler to tell you what it is. I do, however, feel very strongly that issues should be subtextual. My readers don’t pick up my work to be educated or lectured to. I hope some illumination is a byproduct of the experience, but I write the sorts of books I like to read, and twisty, character-driven entertainment comes first and foremost.”

Buck said that one of the unexpected pleasures of writing crime fiction is the amazingly supportive community of crime writers. “By getting involved in my local MWA and Sisters in Crime chapters and attending crime writer conferences, I’ve been embraced by a vast and varied collection of twisted, creative new friends who live all over the world. They are the best enablers a writer could hope for.”

Learn more about Craig Faustus Buck on his website at CraigFaustusBuck.com,