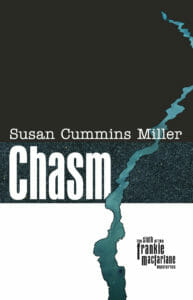 In the summer of 2011, Susan Cummins Miller took a whitewater raft trip through the Grand Canyon. From the rafting trip, sprang her thriller, “Chasm.” In this interview, geologist and author Miller describes how that trip affected her writing.

“Retracing part of Major John Wesley Powell’s explorations, especially with a group of convivial geoscientists, was a highpoint of my geological and paleontological career,” Miller said. “I wanted to share the magic of that journey with my readers.”

So, Susan Cummins Miller set out to write “Chasm,” the sixth Frankie MacFarlane thriller. While previous books in the series have been nominated for multiple awards, Miller realized that the writing of this book would be filled with its own share of twists and turns. “Writing a mystery/thriller set on a commercial raft trip in the Grand Canyon offered unique challenges. First and foremost were how to sustain the tension and maintain the reader’s ‘willing suspension of disbelief.’

“If a passenger’s life is being threatened, as Frankie’s is in ‘Chasm,’ then the river guides will find a way to get her out of the canyon so that the other rafters aren’t put in danger. In order to keep Frankie on the river, everyone but the readers and the villains must believe that it’s safe for her to continue with the journey. But if she’s feeling safe, the story loses tension. I painted myself into a few corners and reworked a healthy number of scenes before solving those problems.”

“Chasm” is a thriller in which armed killers stalk a geologist and her students on a whitewater raft trip through the heart of the Grand Canyon. Sounds more like action-adventure than a thriller with multiple plot lines, but that’s exactly what Miller ended up writing. She said, “I didn’t set out to incorporate social issues, but the characters and situations in ‘Chasm’ do highlight topical subjects. The first is the emotional toll PTSD can take on those who serve in the wars in the Middle East.

“A separate element considers the effect insular and controlling polygamous sects can have on children who are raised in that environment—and how a lack of education can stunt a child’s intellectual and social growth. A third plot thread focuses on the conflict between geologist Frankie MacFarlane’s scientific interpretation of Grand Canyon earth history and the views held by those who believe the Canyon strata and fossils were deposited in the Great Flood. And a fourth subplot, dealing with ecoterrorism in the Canyon, is an homage to Edward Abbey and the Monkey Wrench Gang.”

Miller classifies Frankie MacFarlane as a field geologist, college professor, and geosleuth. But, just because geology isn’t the sexiest subject, Miller wants to reassure readers that “Chasm” does not read like a text book. She said, “‘Chasm’ moves as fast as the Colorado River. And taking a raft trip through the Grand Canyon, even from an armchair, will change readers’ perceptions of earth history. Readers experience the Canyon through a geologist’s eyes, which provides a unique perspective.”

Learn more about Susan Cummins Miller on her website at www.susancumminsmiller.com.