You are here: Home / Author Interviews / Allen Eskens discusses his Edgar-nominated novel The Life We Bury
Spread the love 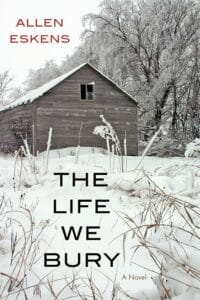 When Allen Eskens decided to become a novelist, he never expected to be nominated for an Edgar with his first book. “The Life We Bury,” however, has been nominated for “Best First Novel” by Mystery Writers of America. He also didn’t expect to hear from readers whose hearts were touched by the book. In this interview, Eskens discusses “The Life We Bury” and how it came into being.

When asked what the book was about, Eskens said, “‘The Life We Bury’ ultimately is a story about people dealing with guilt. In my mind, I envisioned two stories running parallel to one another, but that also intersect as Joe Talbert completes his journey. The vehicle story line (the external plot) is the mystery. Did Carl Iverson kill Crystal Hagen and, if not, who did? It is through this plot line that the reader comes to know Carl and learn about the events that occurred in his past.

“The second plot line is Joe’s running away from home to go to college, leaving his autistic brother behind with their dysfunctional mother. This second plot line (the internal plot) is, to me, the more important of the two. It is in dealing with his brother that Joe can grow as a person. Through the mystery, the reader learns about Carl’s attempt to ‘bury’ a part of his past, a part that fills him with guilt and eats at him. Carl becomes the mentor in the story and imparts to Joe the lesson that one cannot leave guilt behind.”

One of the reasons this book may resonate so well with readers is that very lesson about guilt. Eskens described the lesson succinctly. “One needs to face it, deal with it. Joe is then left to decide whether or not to heed the lesson.”


Eskens said he wanted to write about a protagonist who was a normal person, but was challenged by extraordinary circumstances. “I remembered an assignment I did in college that required me to interview someone who had lived an interesting life. I went to a nursing home to find a subject. I began to wonder what would have happened if I’d gone to that nursing home and met someone with a dark secret, and what if they chose me to be their confessor? That gave the seed of the plot.”

Early in the writing, Eskens felt his protagonist, Joe, should have to run away from home to go to college. The problem was he didn’t know what would drive Joe away. “Then, my wife took me to see ‘The Glass Menagerie’ and it came to me. I would begin my story where the play leaves off—with my protagonist having already left home and dealing with the guilt of that decision. I even slipped an homage to that epiphany into the novel by having Joe attend that play.”

After graduating from the University of Minnesota with a degree in journalism, and from Hamline University with a Juris Doctorate, Eskens settled in Minnesota, where he started a law practice and raised a family. Years later, he realized he wanted to write. He said, “After a mere twenty years of studying creative writing on the side, I wrote my debut novel.” The book was published by Seventh Street Books in October, 2014 and has been drawing critical acclaim since.

About the novel, Eskens said, “‘The Life We Bury’ is a mystery, but it’s also a story of redemption and regret. It’s a story that has at its heart the bond that can exist between brothers.”

In addition to his Edgar nomination, Eskens has had other welcome surprises as a new novelist. He said, “Fellow authors gave me pointers on what to expect from the process of publishing a debut novel—the blogs, the reviews, the book signings—but what I’ve been happily surprised by have been the emails that I’ve received from readers. I was told that I needed an author Facebook page and a separate email tied to my author web page. I created both, but expected both to remain empty. That has not been the case.

“The emails I’ve received have become my favorite part of being an author. They have been encouraging and heartfelt and inspiring. And I love the way that readers will focus on the aspect of the novel that speaks to them. One young writer became emotional with the telling of the story of Joe’s grandpa because it reminded her of her own grandpa. Other readers said that the philosophical discussions in the novel stayed with them after they finished the book.

“But, my favorite has to be an email from a veteran who fought in the jungles of Vietnam in the same year that the characters in the story did. He commented on the conversation that the characters had about feeling pulled to cross a moral line. He wrote that he felt the same struggle when he was fighting the war and had never read an account that expressed how he felt as well as I did. I felt truly honored to have received his note.

“The mere fact that readers take the time to find me and write me a note about how much they enjoyed ‘The Life We Bury’ humbles me. It is my favorite part of being a novelist.”

Learn more about Allen Eskens on his website at www.alleneskens.com.