You are here: Home / Books - Featured / The Blue Journal is a fast-paced read
Spread the love 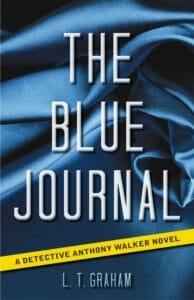 It has been five years since Lieutenant Anthony Walker relocated from New York City to Darien, Connecticut and accepted a position as Detective in the police department. Walker’s big-city style has made his adjustment difficult as he works among the affluent citizens of Darien. His investigation into the death of Elizabeth Knoebel turns up a highly incriminating journal titled “Sexual Rites” that has sexually explicit details of her affairs with several of Darien’s most wealthy citizens. Against orders from his Police Chief, Walker pushes hard for answers to solve the murder.

Psychologist, Dr. Randi Conway has a successful business conducting both private counseling and group therapy sessions. When a patient is found dead, she has difficult decisions to make, but chooses to protect her patients’ privacy and confidences at all costs.

It’s not long before Walker is able to identify many of the people in the journal as being in Dr. Conway’s therapy groups. As he digs deeper into the journal’s secrets, Walker becomes convinced that Dr. Conway has knowledge of who the murderer is and that the doctor’s life could be in danger if she doesn’t help in the investigation. When he confronts her with what he knows, Dr. Conway starts to question her ethics.

There are a number of suspects who are members of the doctor’s therapy groups. While the characters are interesting, some sound much alike and do not have a distinctive voice. Nevertheless, “The Blue Journal” is a fast read with a plot that contains enough twists and turns to keep the reader guessing as to the killer’s identity.