You are here: Home / Books - Featured / The Wrong Quarry—a thriller with an unusual premise
Spread the love 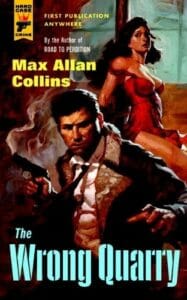 Protagonist John Quarry, a trained sniper in the Vietman war, is a semi-retired hitman who worked through a man known only as the Broker. After ridding himself of the Broker and obtaining the Broker’s list of hitmen, Quarry became a hitman of hit men. His latest target is Matesky, an antiques buyer in Stockwell, MO. Quarry’s surveillance of Mateski leads him to the intended target, Roger Vale, of the Vale Dance Studio. As Quarry investigates, he discovers that Vale specializes in training teenage girls for beauty pageants and is well-liked within the community by everyone except the Stockwell family.

When Quarry approaches Vale with his business proposition, Vale tells him Clarence Stockwell may be the one who hired Matesky because Stockwell blames him for the disappearance of his granddaughter Candace. According to Vale, Candace was the most talented dancer he’d ever taught and he was training her for the Miss Teen Missouri pageant. Vale agrees to pay Quarry to have the hit team removed and look into who hired them.

While investigating Clarence Stockwell and the family to find out who’s behind hiring the hit team, Quarry is busy keeping up with Mateski and his partner. Things heat up for Quarry when he is confronted with evidence that causes him to rethink who he should be working for and also turns him into a target.

The premise for the Quarry series is an unusual and interesting one. John Quarry’s job and uncaring attitude towards killing makes you think it would be difficult to like this character. While his passion for his job is unforgettable, Quarry has a sense of humor and other traits that make him more human. This book has a little bit of everything including mystery, suspense and sex.