You are here: Home / Author Interviews / Behind the story of Three Widows and a Corpse
Spread the love 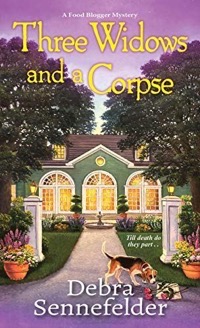 The beginnings of Three Widows and a Corpse

“I guess the question I’m always asking in my books is how well do we really know the people in our lives?” Debra said. She added that when the submission process for the first book in the Food Blogger series started, she was asked to provide summaries of what the next two books would be. “While I had the first draft of book two written, I didn’t have a clue of what book three would be. Then one day the thought about three widows arguing who was the legal wife of a corpse was intriguing. Then a thought about a scavenger hunt popped into my head. So I wrote up a paragraph and that’s how Three Widows And A Corpse came about.”

Of course, there’s a lot that goes into the planning of a book. Debra said she spent a lot of time on Pinterest piecing together the scavenger hunt in the book. “I think I used about one percent of what I planned out.”

Debra said she was lucky enough to be able to attend the Civilian Police Academy in her town to learn more about what the police department does. “I have sent some interesting texts to my nephews, who are both police officers, looking for advice. One of the best parts of writing the Food Blogger series is the recipe development. My friends and neighbors love when I’m testing recipes.”

Like most writers, Debra loves to hear from readers. “Whether it’s an email, a letter or social media comment. Hearing from a reader always makes my day.” So why not learn more about her at debrasennefelder.com?