You are here: Home / Author Interviews / Behind the story of Murder Double or Nothing by Lida Sideris
Spread the love 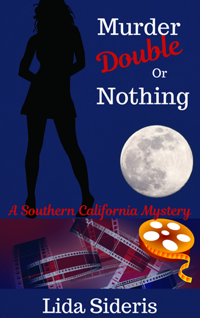 Lida Sideris is an author, lawyer, and all-around book enthusiast. In addition to soft-boiled mysteries, Lida also has written a picture book for ages 4-8 titled The Cookie Eating Fire Dog. Here is the story behind Murder: Double or Nothing, the third book in her Southern California Mystery series.

Murder: Double or Nothing – the backstory

Lida said the story is loosely based on her former life working as an entertainment attorney for a movie studio. “But that’s where it stops. My
life was dull in comparison. I start to doze off whenever I insert my real life scenes. I never contended with petnappings, alien encounters, mysterious assailants or homicides, thankfully. I write what I don’t know using a backdrop that I do know.”

While she’s writing, Lida said she’s not consciously addressing any issues. “My focus is on telling a story that’s fun and action-packed, as well as solving a mystery. But it seems when the story’s complete, I discover themes or issues that were woven in, perhaps sub-consciously.”

One common theme in Lida’s mysteries is pushing the boundaries between right and wrong. “How far should one go?” she asked. “My heroine, Corrie Locke, is perpetually pushing the boundary between legal and illegal activity, and she’s fully aware that if she’s caught, she can kiss her legal career goodbye and…face jail-time. Does that stop her? No, because it’s more important to take the bad guys down. If that means committing a crime herself, so be it. Corrie is acting for the greater good, which makes her unstoppable, but she’s taking a big risk herself. The only time she reels it in, is if there’s a risk to another person.”

Lida was at a book event where her former legal assistant came to hear her speak. They’d worked together during her Hollywood movie studio days and hadn’t seen each other in twenty-plus years. Before Lida’s panel started, her former assistant asked how she could possibly speak in public since she’d always been shy.

“I told her twenty years had diminished my shyness a little, but publishing a book and having the opportunity to talk about writing wiped my shyness out completely. Of course, the shyness kicks in when I’m talking lawyerly stuff, but I love meeting other writers and readers so much that I completely forget to be shy at book events!” 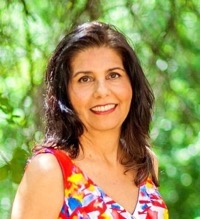 The R word – research can be dangerous

Lida does a lot of research while she’s writing and said it helps her develop ideas, story lines and plot twists. “I scan news headlines, but not from big news sources. I look for lesser-known news stories with quirky or off-the-wall happenings. One such story led to my inserting a possible con job that may be going on in my newest book. That idea came from a news photo I found in an Indian publication about two con artists who claimed to have invented an anti-radiation suit. The photo showed a picture of a man wearing the suit. He looked like he was covered in tin foil and outfitted in a homespun astronaut costume. The con artists actually secured investors who were suing to get their money back! I learn so much from research. Did you know that giraffes can’t swim? Neither can my heroine.”

In Murder: Double or Nothing, Lida’s heroine climbs a thirty-foot magnolia tree to access the top floor of a building. In order to make sure she could properly describe the technique, Lida decided to do a little real-world research.

“I’m not a tree climber. No way, no how. I’m a big fan of trees for shade and for fruit. They’re beautiful and smell nice, too. I’ve even hugged a few. Well, guess what? I happen to have a thirty-foot tall, lemon-scented magnolia in my yard. I started the upward climb and made it to the six-foot mark before falling, I mean, climbing down. It was enough for me to get a feel for it. The rest of my research on tree climbing was done online.”