You are here: Home / Author Interviews / Behind the story of Christmas Trifle by Heather Haven
Spread the love 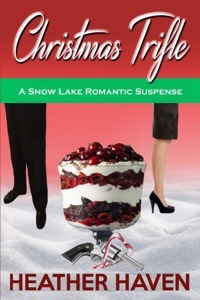 Heather Haven has quite the writer’s resume. She’s penned fourteen novels, short stories, comedy acts, television treatments, ad copy, commercials, and plays. She has won numerous awards and is launching the Snow Lake Romantic Suspense Novel series with Christmas Trifle. She said, “I had written 13 mystery novels but was to discover this was a completely different animal. It took me 18-months to get this novel right. I missed deadline after deadline in getting it to my editor but when I did, I was proud of the achievement. Now it’s up to the reader.”

Heather said Christmas Trifle was inspired by a married chef couple who lived and worked in a small coastal town in California. “They opened a successful restaurant together only to wind up divorced. She got custody of the restaurant. He retaliated by opening his own restaurant at the other end of town. It became a battle of one-upmanship for them, each trying to get the better of the other. The small town loved it. Why not? Two fine restaurants besting one another, offering deals, music and fabulous food. Ultimately, he went out of business in that location, but went further down the coast and opened another restaurant. For all I know these two lovely, talented people never spoke to each other again. But my ending is different than theirs and I’ll say no more.”

Heather also said that even though she’s half Italian, she doesn’t like to argue much. “Just talking louder doesn’t mean you’re right, but try telling my Uncle Frank that. As for issues, I deal with the intricacies of relationships, all kinds. In Christmas Trifle it’s about the relationship between a married couple, two chefs, who are madly in love with one another, but manage to get off-track. Anger, hurt and resentment replaces common sense. Both do immature, funny, yet destructive things to one another while an entire town watches in amusement and surprise. As one character says to Charly, the female protagonist, ‘Honey, you’re not watching a train wreck, you are the train wreck.’” 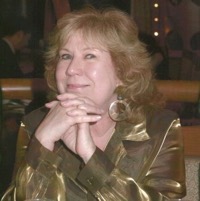 “I want everyone to live a positive life. To believe in themselves and be happy or at the very least, strive for happiness. As Thomas Jefferson wrote in the Declaration of Independence, ‘life, liberty, and the pursuit of happiness’ is our inalienable right. But getting there? Ah! There’s the rub. People are often browbeaten into thinking less of themselves or not deserving of happiness. Everyone deserves to be happy. All of my books hold tight to that theme.”

Calistoga is a small town located in Northern California’s wine country. It’s famous for its mud baths. It’s also something Heather experienced firsthand in researching one of her novels. “I had a scene in one of the Alvarez Family Murder Mysteries where my protagonist has a mud bath, sharing it with her soon-to-be husband. I asked my husband to join me in one. Right here and now I want to say, mud gets into places you don’t even know you have. A shower is simply is not going to do it. They provided a fireman-like hose that can blast mud, jewelry, makeup and skin right off you. But you come out very, very clean. I would go back in a heartbeat, even though I’m still looking for one of my rings.”

Find Heather on the web at heatherhavenstories.com.