You are here: Home / Guest Post / Guest post – The Novel Art of Murder by V.M. Burns
Spread the love 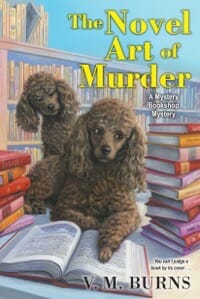 Anyone who’s read my books (or even just looked at the covers) might have figured out that I love poodles. What some people may not realize, is that the dogs on the covers of the Mystery Bookshop Mystery Series are actually, my dogs. Coco and Cash were the inspiration for the protagonist, Samantha Washington’s dogs, Snickers and Oreo. So, I thought I’d share a little bit about these supporting characters. 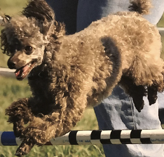 Coco is the older of the two poodles. She is feisty, expressive and the brains behind any poodle hijinks that occur in my home. While we had white toy poodles when I was growing up, Coco was the first dog I owned as an adult and she was a dark chocolate when I first got her. However, over time her coat has lightened as she’s aged. She isn’t the most beautiful dog when it comes down to comparing her against the breed standard listed by the American Kennel Club (AKC). Her coat is soft and fine, rather than thick and curly. 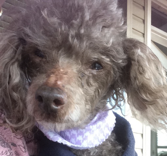 The breeder docked her tail a little too short, so she has a short stubby tail, rather than the longer tails which are often seen on the breed. Coco would never win a beauty contest, but she has a certain…something that makes her stand out from the crowd. She loves to cuddle and I firmly believe that Coco thinks humans were put on this earth to scratch her belly. She will prostrate herself at your feet and boldly use her paws to maneuver your hand to the area which will give her the greatest pleasure. Visitors beware, Coco, like Snickers in the series, has the uncanny habit of being able to stick her tongue in your mouth, if you’re not careful. Over the years, I’ve learned to keep my mouth firmly closed around her.

Cash is the younger of the two poodles. I got him to keep Coco company while I was at work. At first, Coco didn’t seem to like Cash very much. Twice, I would have sworn she deliberately led him into traffic, and she absolutely refused to make eye contact with him for the first two months we had him. However, after a while he grew on her and they became good friends (as long as he remembers who’s the boss).

Cash is eager to please and has a real zeal for life that makes me laugh. He isn’t afraid to leap before looking, even if that means leaping into a bush full of painful burrs (yeah, that took hours for me to remove with tweezers). Cash isn’t a cuddler, but he is willing to endure public humiliation without complaint.

Poodles are a wonderful breed. They’re intelligent and loving. They have hair, not fur, so they don’t shed and can be great in performance events like canine agility and obedience. They are also great pets, but like all dogs need to be properly trained. Over the years Coco and Cash have brought a great deal of joy and laughter to my life. I hope they can do the same to readers of the Mystery Bookshop Mystery Series.