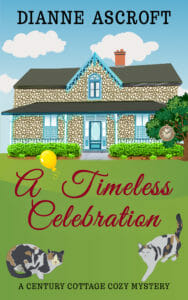 The Perfect Town for a Cozy Mystery

One of the things that draws readers to a cozy mystery is a place that appeals to them. It’s important that the place where the story is set beckons to readers to step in and stay a while.

Some places just linger in your mind. Something about the atmosphere of a particular location grips you. For me that spot is Fergus, Ontario, Canada, a small town one hundred kilometres northwest of Toronto. It first captivated me almost forty years ago, and last summer I realised that it was the right place for my first cozy mystery.

I first visited Fergus in the early 1980s. The Fergus Highland Games (now the Fergus Scottish Festival and Highland Games) is held at the beginning of August each year and, for nearly a decade, I competed in the pipe band contest with the band I belonged to. It was always an amazing day as the town’s Scottish heritage came to the fore. The air was filled with the skirl of bagpipes and the rattle of the drums, and there was a sea of tartan everywhere: from kilts to picnic blankets to car stickers. This yearly event linked the quaint town with fun and excitement for me. 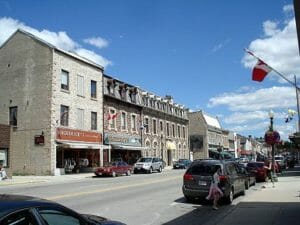 At the beginning of this century, I became a regular visitor and got to know the town a bit better when my mother went to live in the local nursing home. I discovered the townspeople’s sense of community: a sense of responsibility and caring towards each other that I hadn’t known in the huge city where I grew up. When I visited, I pushed my mother’s wheelchair along the peaceful banks of the Grand River, greeting other walkers we passed, and at a nearby diner where we ate lunch, the waitress always remembered my mother’s order.

For the past few years I’ve written Second World War fiction, set in Northern Ireland. Then last summer, I decided to have a change of pace. I had an idea for a mystery series, Century Cottage Cozy Mysteries, and knew that Fergus would be the perfect setting for it. I fictionalised the town as Fenwater and changed some details, but many places in A Timeless Celebration, the first book in the series, closely resemble Fergus as it was during the 1980s. 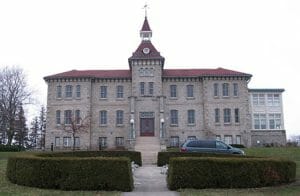 In the opening chapter, the reader meets the main character Lois Stone and begins to get a sense of who she is from her reactions to her new surroundings. Widow Lois has recently moved to Fenwater and is adjusting to the move from the city to a small town. She has bought an historic house, known as a century house, in the Ontario Cottage style, a traditional style of the region, and is settling in and reflecting on her new life:

Raggs took mincing steps toward the hallway and stopped at the door. Lois stood up and followed the cat. She opened the door and let her hand trail across the wide, dark wood architrave that surrounded the doorway. All the doors in the house were framed with architraves, which had a simple parallel line design running the length of the wood with ornate carving in each corner of the frame. The style was repeated in the window architraves, and she loved it. With the age-darkened architraves, window frames, floors and skirting boards, she felt like she was living in an old, welcoming library. What could be better for a semi-retired librarian? Combined with the furnishings she had chosen to either bring with her or buy, she was sure she had created an atmosphere that would make her love this house. It would take time to adjust to leaving the city but this house would sure help her to settle in. She didn’t regret buying it.

As Lois hesitantly begins to meet the town’s residents, explore her new abode and inadvertently gets involved in helping to solve a crime, readers experience the town through her eyes. In Chapter Two Lois has reluctantly accepted her best friend’s invitation to attend the opening ceremony for the town’s Sesquicentennial Celebration Week:

Lois took a deep breath as she climbed the two long flights of steps to the Museum entrance, feeling the heat of the sun as she climbed. Looking up at the light grey stone, two-storey building, its Italianate-style architecture reminded her of a Victorian orphanage or even poorhouse, which it had been originally. But, despite its gloomy beginning, she found the Victorian building’s architecture reassuring: stable and familiar as if it were somewhere she already knew. She still wasn’t sure that she was ready to start mingling with the other residents of the town but Marge had insisted that she come. She couldn’t disappoint her. So, despite her unease, at least the building made her feel welcome.

Throughout the novel Lois continues to experience the warmth and charm of her new home town and I hope I have described the places she goes well enough that readers will enjoy it with her.