You are here: Home / Uncategorized / Behind the story of Pineapple Upside Down Murder
Spread the love 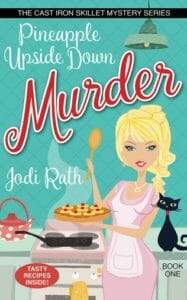 Jodi Rath decided to begin a life of crime in her The Cast Iron Skillet Mystery Series. She splits her time between working as an adjunct for Ohio teachers and creating mischief in her writing. Pineapple Upside Down Murder is the first book in the series.

Grandma and the cast iron skillet

“My grandma gave me her 70-year-old cast iron skillet for Christmas in 2017 and told me she only has made pineapple upside down cake in it and expected me to do the same. I had never cooked with cast iron before. She also bought me new cast iron skillet set so I could make other things. I’ve been cooking with them all year and that is where I got the idea for the series, The Cast Iron Skillet Mystery Series, and book one Pineapple Upside Down Murder.”

Family dynamics and the theme

“There are two working themes throughout the fourteen book series,” said Jody. “The first deals with the everyday paradoxes of family and friends. Juggling their needs with one’s own needs; feeling both love and hate for them at times (but also, if anyone else says anything bad about them, we tend to see red and unleash all Hades on that person). My protagonist has a regular saying, ‘Why is it my family can push my buttons so easily? Oh, yeah, it’s because they installed them.’  That is the first major working theme in the series—the dynamic of family and close friends that are like family.”

Jody said the second theme ties into urban sprawling. Because her cozy mystery is set in a small village with a big city nearby, people from the village often end up in the city and vice versa for multiple reasons. “Many city folk have a stereotype about the villagers and vice versa.  So, an issue will arise with urban sprawling that will set the villagers against the city community.  This theme is similar to the family dynamic in focusing on how often we, as humans, stereotype without even realizing we are doing it and how these people argue and fight and ultimately—HOPEFULLY—work through their issues and realize their similarities more than their differences. That will be the pull throughout the series.”

Self reflection and challenges 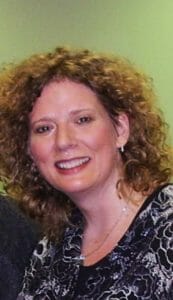 “I’m flawed in many ways,” Jody said. “But I’m extremely empathetic, self-reflective, and introverted. I’m my own worst critic. Being a veteran teacher with over twenty years, I feel that all parts of life is a learning experience and a journey. I feel the same about writing. I’m a perfectionist too; this makes writing difficult for me. Drafting is horrible! Plus no one writes THE PERFECT novel, ever…I have to remind myself to do the best I can in this moment and let the rest go. Easier said than done.”

In fact, Jody started the book seven years ago. It was originally a straight mystery. “This year, I began working with a small press where it became a cozy in third person point of view. Originally as a cozy, it was going to focus on a teacher, then my grandma gave me my Christmas gift and voila, it’s now The Cast Iron Skillet Mystery Series, written in first person point of view by a self-published author. Definitely a major journey!”

Ever wondered what a writer might do if she was caught speeding? Well, here’s your answer—Jody was pulled over by a police officer for speeding, but when he came to her ticket, she decided to take advantage of the moment.

“I told him I was writing a mystery and asked him if I could do some research. He looked at me like I was a nutball, which is true! I took my journal out of my big purse and began questioning him. He was nice enough to answer eight questions for me that I thought up on the spot. Got to take advantage of every single event that happens in your life when you are a writer!”