You are here: Home / Author Interviews / Behind the Story of Trimmed to Death by Nancy J. Cohen
Spread the love 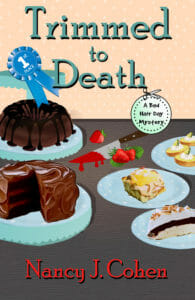 Nancy J. Cohen writes the Bad Hair Day Mysteries featuring South Florida hairstylist Marla Vail. Titles in this series have made the IMBA bestseller list and been selected by Suspense Magazine as the best cozy mystery. Nancy has also written the instructional guide, Writing the Cozy Mystery. Her latest Bad Hair Day Mystery is Trimmed to Death. Here’s a look behind the story.

“Children dying in hot cars is a serious subject in South Florida where this happens with unfortunate frequency. It’s a tragedy that can be easily prevented with proper education. I mention prevention tips in Hair Brained and continue with this issue in Trimmed to Death. There’s no excuse for leaving a kid or a pet in a car in ninety-degree heat even for a few minutes.”

Nancy described Trimmed to Death as a natural progression of her sleuth’s character arc that began in Book #1, Permed to Death. “Marla starts out as a divorced hairstylist who doesn’t want children due to a past tragedy. After she meets handsome Detective Dalton Vail, she moves forward in her emotional journey. He, too, has issues to overcome before they can forge a life together. They get married in Shear Murder, book #10. As a married couple, they have adventures when they go on a honeymoon and move into a new neighborhood. Then Marla is forced to meet her demons when her best friend Tally is hurt in a car accident. Marla is guardian of her friend’s son and has to care for the infant. She realizes motherhood might be in her future after all. The result of this insight comes into play in Trimmed to Death, where she comes full circle in her character growth.

“Marla’s instincts lead her to crime-solving, but can she also manage her salon along with having a family? In this story, she learns she doesn’t have to handle things alone. She has Dalton along with both of their mothers to help. It’s time for her to move forward in life. Her character’s evolution is what brings readers back for more. Fans want to see what happens next with Marla and Dalton.” 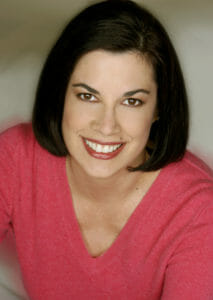 Research — a chance to indulge

When asked what she felt readers should know about her, Nancy quipped, “I need Marla to do my hair! Seriously, I want my characters to become friends who matter to you. I appreciate reader feedback and welcome your comments and reviews.”

But actually, for anyone who’s heard about how crazy Florida can be—and who hasn’t?—it might be more important to know Nancy does her research.

“I loved doing research on olives,” Nancy said. “I’m a big olive fan, so I was curious to learn the differences between green and black olives, the depth of olive oil scams, the health benefits of olive oil, and how olives are produced. I was surprised to discover olive groves exist in Florida. Since I’m a foodie, I also include recipes in this book. Just as an example of one thing I learned, some olives are cured with lye. This was news to me.”

And then there are the locales she looks into. “There’s also a scene in the woods at night. This is based on Tree Tops Park in Davie, Florida, where my husband and I like to take a stroll. I’ve seen spreading banyan trees like the one in the story, and I was fascinated to learn about the roles of banyan and acacia trees in early mythology. It’s imperative that I learn something new with each book. That makes it interesting to me and gives readers something to take away. This story gave me many topics to consider, and that’s what made it special.”

Nancy also said, “Trimmed to Death starts out at a local farm festival. Marla has entered her coconut fudge pie recipe in a bake-off contest at the urging of her best friend, Tally. Things go downhill from there when Marla discovers another contestant face-down and dead in the strawberry field. I modeled this setting after Bedner’s Farm in Delray Beach, which I’ve visited. Doing the research on bake-off contests and farm festivals was fun, and I discovered an event that was new to me. I had Marla join a live scavenger hunt after doing further research on this topic. The food issues in the story greatly interested me.”

But all those bits of research sound very tame compared to when she went ‘undercover.’ Nancy said, “I needed to scout out the locale for a scene in Perish by Pedicure. So I stripped off my clothes, put on a swimsuit, and carried a camera under a towel at a Russian shvitz in North Miami Beach. It was an eye-opening visit as I’d had no idea what to expect.”

Learn more about Nancy on her website at nancyjcohen.com or on her blog, where she discusses the writing process and life as a Florida resident.

What: This month, Nancy is giving away a “Haunted Hair Nights” e-book novella and I’m adding a $5.00 Starbucks gift card. One random entry will be chosen as the winner. The winner will receive a book and a gift card.

Who can enter: This contest is open to US residents over 18 years of age.