You are here: Home / Author Interviews / Behind the story of Drop Dead Ornaments by Lois Winston
Spread the love 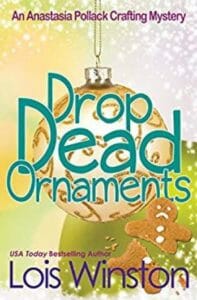 News is the genesis of Drop Dead Ornaments

Lois describes herself as a ‘news junkie.’ She said, “In each book of the Anastasia Pollack Crafting Mysteries I’ve incorporated some current news event or an issue I’ve read about in the news. In Drop Dead Ornaments, the 7th book in the series, I explore the unforeseen repercussions of a sudden windfall. In addition, I touch on the opioid epidemic. However, I don’t want to be more specific with either because I’d be giving away too much of the plot, and that would spoil the suspense.”

Drop Dead Ornaments opens with Anastasia’s son Alex involved in his senior class project. Lois wanted to incorporate this high school life into the story because many schools now require seniors to perform some sort of community service as a graduation requirement. “Many simply raise money for some local charity by selling candy or wrapping paper,” Lois said. “Alex and his classmates wanted to raise money for the county food pantry, but they didn’t want a third party vendor taking a cut of the money they’d raise. Alex had the brilliant idea of getting his mom, who works as a craft magazine editor, involved. Anastasia tapped her industry contacts to donate the supplies for making Christmas ornaments. She taught the students how to make them, and the kids then sold them at the town’s annual holiday bazaar.”

Despite the focus on current events, Lois describers the Anastasia Pollack Crafting Mysteries as humorous, not serious mysteries. “I not only want to tell a compelling story and keep my readers guessing whodunit, I want to give them a fun few hours of escape.”

Research a little too close to home—and far away

“Lucille Pollack, Anastasia’s communist mother-in-law, may come across as an over-the-top character to some readers, but to most she’s the character my readers love to hate,” Lois said. “Truth is often stranger than fiction, and that’s definitely the case with Lucille. She was inspired by my own communist mother-in-law. For six years I had the misfortune of sharing a home with the woman, and trust me, there’s little in the way of gross exaggeration in the fictionalized version of her.”

In addition to the seven Anastasia Pollack Crafting Mysteries, Lois has written three companion novellas. Mosaic Mayhem takes place in Barcelona. Lois said she didn’t travel to Barcelona specifically to research the city, but while there on vacation, she decided the city was a perfect setting for one of the mini-mysteries.

Learn more about Lois and her writing on the Killer Crafts & Crafty Killers blog at www.anastasiapollack.blogspot.com.