You are here: Home / Author Interviews / Behind the story of Barnabas Tew and the Case of the Nine Worlds
Spread the love 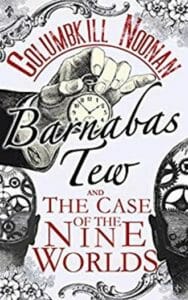 Columbkill Noonan has an M.S. in Biology and has been a field biologist, an environmental compliance inspector, and a lecturer of Anatomy and Physiology. She also enjoys practicing yoga and writing. Barnabas Tew and the Case of the Nine Worlds is the second book in this series.

In fiction, unusual is good

Barnabas Tew may be the definition of a quirky character, according to Columbkill. “I had the idea for this silly character, who is a little bit confused, slightly awkward, and very much nervous. This slowly evolved into the idea of Barnabas, British detective not-so-extraordinaire. He is uptight but earnest, excitable but brave, irritable but full of heart. He is a walking contradiction, and he knows it. What better place to put him than in a mythological afterlife, where things are completely unpredictable, and very much out of his comfort zone?”

In addition to Barnabas being unusual, Columbkill said she likes to develop her female characters  more than some authors. “Sometimes female characters in fiction are a bit one dimensional…they fit the mold of a particular type. They might be the femme fatale, or the tomboy, or the nurturing type. But real women can be any of these things, or none, or all of the above!

“I like to write female characters that are unexpected. For example, Brynhild is one of the main characters, and she works closely with Barnabas and Wilfred. Since they’re detectives from Victorian times you might expect them to treat her with more than a little condescension, but they don’t. Aside from Barnabas’ silly attempts at occasional gallantry (like the time when he literally threw himself to the wolves in order to keep Brynhild and Wilfred safe, which was more just a natural expression of his manners than anything else!) they treat her as an equal. Actually, I think they look up to her!”

“I wrote both of my books with my orange cat sitting on my lap. The whole time. Every word. As soon as the laptop comes out she comes running. It doesn’t matter what time of day, or where I sit…she knows I’m about to write and she’s going to sit on my lap. She’s here right now. I wonder if she’s my muse.” 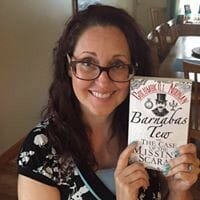 Columbkill also said she’s more than a little like Barnabas. “Some of those crazy situations that he finds himself in…well, they’re not entirely fictional!”

For instance, she went to Machu Picchu with a friend. They flew to Cusco, which is over 11,000 feet in elevation and took a four-hour train ride down to the ruins, which are at about 8,000 feet.

Columbkill said, “If you’ve ever been there, you’ll know just how high the altitude is, and that you shouldn’t really fly straight to Cusco from sea level (not if you want to be able to breathe, that is…the oxygen is so thin there that altitude sickness is a real problem!). Anyway, we were both terribly altitude-sick but determined to enjoy Machu Picchu nonetheless. We get there, climb all over the ruins, really push ourselves (it was worth it, though…an amazing place!) So, at the end of the day, we get back on the train to go back to Cusco.”

At this point, both Columbkill and her friend were exhausted and severely oxygen deprived. “We were sucking furiously on these candies they give you that are made of coco-leaf which are supposed to help you not be absurdly dizzy. We both lay our heads on the table to take naps, and I’d just fallen asleep when this loud Peruvian music starts blaring. Next thing I know, a guy wearing what can only be described as a rainbow-devil mask grabs me by the arm. He pulls me to my feet and whisks me into a whirling dervish of a dance up and down the aisle of the train. When he sits me back in my seat my friend looks at me, blinks, and says, ‘Well, that happened.’ Then we both put our heads back down and went back to sleep. If that’s not a Barnabas sort of thing, I don’t know what is!”

Click here to more about Columbkill Noonan or Barnabas Tew and the Case of the Nine Worlds on her blog.