You are here: Home / Uncategorized / Behind the story of Flower Power Fatality
Spread the love 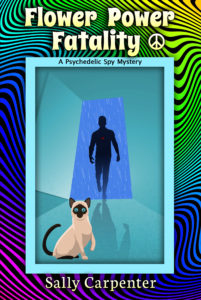 Sally Carpenter has had a varied career, having worked as an actress, college writing instructor, theater critic, jail chaplain and tour guide/page for Paramount Pictures. To round out her career options, she’s now employed at a community newspaper and writing mysteries. Flower Power Fatality is the first book in her Psychedelic Spy Mystery series.

For real. And you can thank Hollywood for having a hand in the concept behind this series. “Several years ago my parish hosted a fundraising concert with some old rockers from the 1960s,” said Sally. “I’m a fan of the ‘60s era, and as I listened to the oldies I thought a cozy series set in that time would be fun. I didn’t know the ‘hook’ I wanted, as the 60s culture encompassed such a broad range of issues and personalities. Then I watched the Doris Day movie The Glass Bottomed Boat about a civilian who gets mixed up with spies. Aha! I love the old spy series/movies of the ‘60s, so writing a spy caper sounded groovy.”

Uh oh, there’s a word I thought was left behind with bell bottoms. But then, bell bottoms have made a comeback. Sally also said she thinks she has the first cozy ever in which the protagonist is a regular churchgoer, but she isn’t a fanatic, holy roller, Bible thumper or hypocrite. “In this small town, people attend church out of habit, just as one goes to school or a job. The residents are not perfect, but they strive to live a good life. The protagonist gets involved with a super-secret spy agency and some of the things she’s asked to do conflict with her moral values. She finds ways to get the job done without compromising her conscience—something that real-life believers are often asked to do. But the book doesn’t preach or get maudlin or sentimental.” 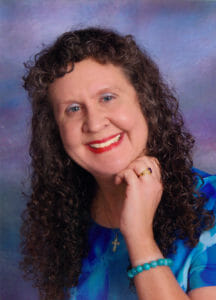 A child of the 60s herself

Sally said that her protagonist, Noelle McNabb, bears similarities to her when she was twenty-five. “I grew up in a small rural town in Southern Indiana and, like Noelle, I wanted to move to the ‘big city’ where things happened. I also wanted to be an actress in Hollywood and star in my own TV show. I eventually moved to SoCal but instead of acting I write the Sandy Fairfax cozy series about an actor/musician who once had his own TV show. So I’m living vicariously through my characters. Like Noelle, I also have a black cat and earned a theater degree from Indiana State U. Unlike her, I don’t drive a VW Beetle or have family living nearby.”

No craziness in this writing life

As far as her writing life goes, Sally describes it as mundane. “The biggest challenge is finding the energy to write in the evening after my day job. The research was pretty straightforward, mostly looking up things on the internet and digging up memories of my life in the 60s. I bought a couple of books for research. One was about how to live like a hippie; I used that to build my two hippie characters. Can’t talk about the 60s without hippies. The other book was about Santa Claus, Indiana, the real place I used to model my fictional town. Santa Claus has a theme park once called Santa Claus Land but is now Holiday World/Splashin’ Safari. The photos in the book gave me an idea how the park probably looked in the ‘60s. My book has a similar type theme park called Country Christmas Family Fun Park.”

Sally said that when she started writing the Sandy Fairfax cozy series, which is about a 38-year-old former teen idol turned amateur sleuth, she dove Into the research “I attended Monkees concerts, met fans, bought collectibles and albums, read newsletters and did all the fan stuff. It was fun but eventually rather expensive. I’ve slacked off, as I’m now focused on my own writing and no longer care to drive for hours or pay $60 and up to attend a concert.”

Learn more about Sally Carpenter, Flower Power Fatality, or her other retro-cozy mysteries at sandyfairfaxauthor.com.