You are here: Home / Author Interviews / Behind the story of Death said the Gypsy Queen
Spread the love 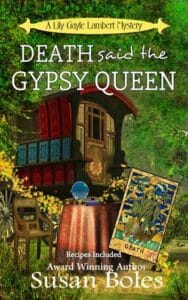 Susan Boles is the USA Today and Wall Street Journal Bestselling author of the Lily Gayle Lambert Mystery Series. Death said the Gypsy Queen is the fourth book in the series.

“Each book in the series has been inspired by different things,” said Susan. “This one is no exception. I love to listen to classic rock and one day I heard ‘Sign Of The Gypsy Queen’ by April Wine on the radio and it felt like lightning struck. Not literally. LOL. But, somehow the song spoke to me for the next book in the series because it tied in so very well with the background theme that runs through the books of people who are tied together by genetics like the ‘wolfman’ in the first book and the ‘vampire’ in the third book. More information about that will be revealed in Death said the Gypsy Queen.”

Susan also said she cares deeply about her books and her readers. “I try to create a good story that brings enjoyment to everyone who reads my books. I also try to bring some of my own world into all of my books. I’m a seventh generation small town southerner and I try to bring that life into my books with my characters. The generational interaction, the family connections and the lifetime connections. My characters are all a mix of different people I’ve known or have met over the years and I hope readers can relate to any or all of them. My mother is convinced Miss Edna is based on her – even though I’ve explained to her that no character is based on any one person.”

The Lily Gayle Lambert Mystery Series books are set in the fictional town of Mercy, MS. “I have stitched together various actual homes and businesses to form the town,” Susan said. “Lily Gayle’s home is one that is not far from where I live. I’ve never met the people who live there. I hope, they weren’t home when I took pictures of the outside to have as reference for the book. No police showed up to question me—so I think I dodged a bullet on that one. As for the name of the town, I originally had it as Mercyonus. But that got voted out by various people who said it was just too corny. Even for a cozy mystery. And this came from people who live in or near towns named Finger and Sweet Lips!” 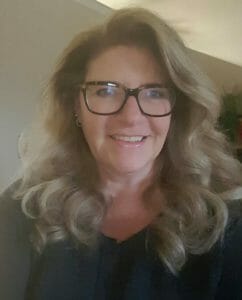 Living in a small town has its advantages. Once, when Susan was doing research for a stand alone historical women’s fiction novel, she was in the courthouse basement in Selmer, TN when she spotted an old man in overalls and a dirty ball cap sitting nearby watching her.

“He never took his eyes off me. Very creepy. I figured that since the county sheriff’s department was down the hall that nothing really terrible could happened. But still. Very creepy. When I took the books I was using back to the county clerk to return them, he came over to me and said. ‘You’re Shirley Russell’s girl, aren’t you,’ I cautiously agreed that I am and he said, ‘I’m your mama’s high school basketball coach. You look just like her.’ Wow! I had never met this man in my life and my mama had been out of high school for about forty years at that time, so this guy had a good memory. And, once he said that to me, I knew who he was. So, I said, ‘You must be Derucie Henry.’ And he gave me a huge smile and said, ‘She told you about me?’ So, we ended up chatting for about half an hour. Because my mama had told me about him. She had played basketball for him all four years of high school and been the captain her senior year.”