You are here: Home / Author Interviews / Behind the story of Sherlock Holmes and the Case of the Disappearing Diva
Spread the love 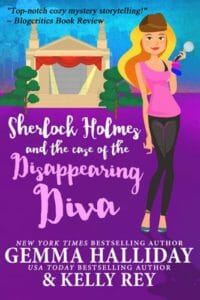 Before becoming a New York Times Best-selling author, Gemma Halliday went through a number of careers. According to her website, she’s been a film and television actress, a teddy bear importer, a department store administrator, a preschool teacher, a temporary tattoo artist, and a 900 number psychic. These days, Gemma has found her niche—writing mysteries. Here’s the story behind her latest, Sherlock Holmes and the Case of the Disappearing Diva.

“I grew up reading mystery classics such as the Sherlock Holmes books by Sir Arthur Conan Doyle, so the idea for the Marty Hudson Mysteries came directly from those. I really liked the idea of bringing about a female-driven, modern take on the legend of Sherlock Holmes. It was very important to me that women be the main protagonists in the story, so I began combing some of the Sherlock Holmes literature for some of the lesser-known female characters that might make interesting subjects of the new series. Turns out, there really aren’t that many important female characters in this series! The most prominent one was probably Irene Adler.

“In the original Sherlock Holmes stories, Irene Adler is portrayed somewhat as the ‘one who got away’ and the only woman Sherlock Holmes ever really loved. She was the one woman he saw as an intellectual equal. In our version of the Sherlock legend, Irene Adler is not only beautiful and intelligent—being a computer prodigy who began her career by hacking into the Pentagon as a child—but she’s also fun, fashionable, and never takes no for an answer. Irene plays the sidekick to our main character, Marty Hudson, who is very loosely based on Sherlock Holmes’ long-suffering landlady at 221 Baker St. in the original Sir Arthur Conan Doyle versions.

“In our world, Marty Hudson inherits a dilapidated Victorian at 221 Baker St.—in modern-day San Francisco, not Victorian England—and she struggles to rehabilitate the old home on her salary as a barista at the Stanford University Bookstore Café. One perk of working at Stanford? Marty has access to crash as many lectures and classes as she possibly can, gaining her an eclectic knowledge base that leads to many ‘Sherlockian’ moments throughout the series.” 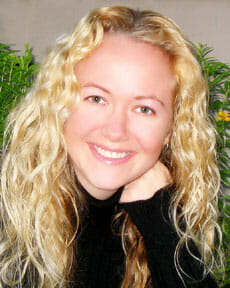 “I write for readers not for myself. One of the biggest lessons I’ve learned as an author is that you have to know who your audience is. If I’m speaking in a language that no one around me understands, I haven’t got a prayer of getting my message across to anyone. But if I listen to my readers and understand what it is they want to hear, I can get my message out loud and clear.”

With that mantra as her guiding principle, Gemma says most of her books have a very clear theme of “girl power.”

“Many of my characters reflect my own personality in that they are very girly, they love dressing up in pretty clothes, shoes, and jewelry, and embrace their feminine sides completely. But men should never mistake their girliness for weakness. I’m a firm believer in the idea that a woman can wear a fabulously adorable pink outfit and still be a boss in the boardroom. I think a lot of times in society, and in literature as well, women are either portrayed as strong or girly. In my books I try to portray women who can be both. You will find a lot of beautiful, bubbly, fabulously dressed, incredibly intelligent women in my stories. And while they have a healthy appreciation for the men in their lives, none of them rely on those men to take care of them or ‘save them’ from any of the difficult situations they may encounter.”

Gemma said her favorite thing about writing the Marty Hudson Mysteries is working with her co-author, Kelly Rey. “While a lot of the plotting and mystery elements in the book are things I like to do, Kelly has an absolute knack for writing hilarious scenes and quirky characters. So many times while I was working on this book I found myself laughing out loud at something that Kelly had written. I feel so fortunate to have a job where my days are infused with laughter like that!”

At one point, Gemma and Kelly were trying to figure out exactly how their victim should meet her demise. Gemma said, “Kelly had already written some really wonderful scenes that I wanted to keep in the book, however we had written ourselves into a corner with how we would work in the actual way our victim had been killed with those existing scenes. As my family can tell you, I probably sounded like a crazy woman walking around my house for three days muttering to myself, ‘How am I going to kill her?’ I can only hope that ‘Alexa’ never records any of the conversations in my house. If she did, the police would for sure be at my front door!”

Learn more about Gemma Halliday or Sherlock Holmes and the Case of the Disappearing Diva at gemmahalliday.com.

What: This month, Gemma is giving away one Kindle copy of “Sherlock Holmes and the Case of the Brash Blonde” and I’m adding a $5.00 Starbucks gift card. One random entry will be chosen as the winner. The winner will receive a book and a gift card.