You are here: Home / Author Interviews / Behind the story of Spook in the Stacks
Spread the love 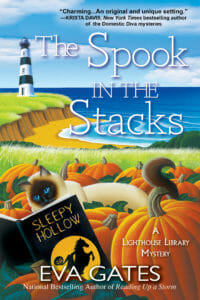 Eva Gates is the pseudonym for one of Canada’s most prolific and varied crime writers, who is also a national bestseller in the U.S., Vicki Delaney. Vicki has written more than twenty-five books, including clever cozies, Gothic thrillers, and historical fiction. The Spook in the Stacks is the latest release in her Lighthouse Library series.

“I’m not trying to say anything in this book,” Vicki said. “It’s a cozy mystery and it’s intended to be light and funny and offer the reader an escape from reality.  I’ve written more ‘serious’ books in the past, a police detective series and three standalone psychological suspense novels, and in those I’ve sometimes addressed important social issues, but now that I’m writing cozies, I’m enjoying the freedom to just have fun. And it’s my hope that the reader has fun also.”

For Spook in the Stacks, the fourth book in the Lighthouse Library series, Vicki said she thought it would be fun to set something around Halloween. “One of the premises in the series is that the book the library’s classic novel book club is reading is reflected in the plot of my book.  I started looking for a light story that could be tied into Halloween and remembered The Legend of Sleepy Hollow, which I love. It’s not scary in the least, but thoroughly charming, and fitted the mood of The Spook in the Stacks perfectly.  The reader will have to read it to see what plot points I’ve borrowed! I also read Bracebridge Hall by Washington Irving (as did the book club) but it’s very long and very dated, so I don’t recommend it to any but the keenest classic novel reader.” 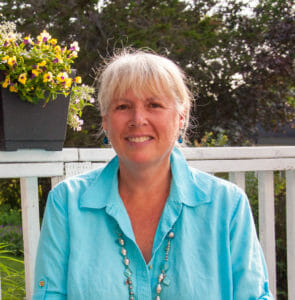 “I’ve written almost thirty published books and I am currently writing three cozy series as well as the Lighthouse Library series,” Vicki said. “I write the Sherlock Holmes Bookshop series for Crooked Lane Books and the Year Round Christmas Mysteries for Penguin, both of those under the name Vicki Delany. I love writing them all and am so glad that I have the chance to do what I love.  I enjoy getting readers’ email, so please keep your thoughts coming.”

“The most enjoyable thing, by far, is travel for research,” Vicki said. “I loved getting to know the Outer Banks; I went to Cape Cod to check it out when I decided to set the Sherlock Holmes Bookshop series there.  I recently went to London on a research trip because in the fifth Sherlock Holmes Bookshop book, the gang is off to England. It’s fun to travel and I’ve found it’s particularly fun to travel with a goal in mind, such as looking for the perfect pub to send your characters to for dinner, or to check out the light as the sun rises over the ocean.  Or find the best plate of shrimp-and-grits.”

“I did extensive research into the quality of shrimp and grits and hush puppies. Yes, research is hard, but some sometimes you have to do it in the interests of a good book.  I greatly enjoyed touring both the Bodie Island Lighthouse (the real-life setting of my library) and the Currituck Lighthouse in Corolla and that started a real interest in lighthouses. They really are pretty amazing things.”