You are here: Home / Author Interviews / Behind the story of The Cupid Caper with Larissa Reinhart
Spread the love 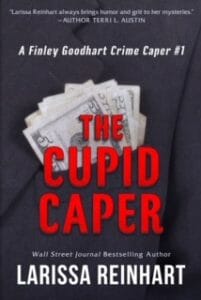 Meet Larissa Reinhart. She’s been an English teacher in Japan, escaped a ferocious monkey in Thailand, studied archaeology in Egypt, and survived teaching high school history in the US. If that’s not enough to impress you, consider that she’s also a Wall Street bestselling author. Here’s the story behind her new Finley Goodhart Crime Caper, which is titled The Cupid Caper.

A funny girl, but a serious theme

“My main purpose is to entertain, which is probably why I stick to writing humorous stories. But I do use themes when I write. A recurrent theme I use in all the series is parental abandonment — literal or emotional — and that effect on the grown child. In the Cherry Tucker and Maizie Albright books, their issue is with their mothers. In this new series, Finley Goodhart Crime Capers, her father is the corrupt parent. It’s a common theme in stories, and as a parent and ex-teacher, it’s one that really strikes a chord with me. Plus, the emotional psychology can be used to create the kind of issues that makes for a good amateur sleuth.

“In Finley’s case, her father — who she holds responsible for the death of her mother — is what caused her to start her life of crime. Finley’s a con artist. Her father is a sheriff beholden to mobsters. Finley figures this out at seventeen, when she starts to investigate her mother’s death. But instead of going down the path of my other amateur sleuths, Finley loses faith in the justice system, runs away, and becomes a criminal. So this is more of an anti-hero story.”

Larissa said the other themes in The Cupid Caper are trust and faith. In the beginning of the story, her protagonist Finley feels she can’t trust anyone. The phrase, “Trust is for suckers.” is applied to the man she’s in love with.

In the beginning of The Cupid Caper, the one person Finley thought she could trust—a friend who taught her to live on the streets—is now dead. Larissa said, “But as Finley learns more about her friend’s death, she begins to lose faith in that relationship, too. So The Cupid Caper is a real crossroads for Finley.

“I’ve always loved con artist stories. The Sting, Paper Moon, and Breakfast at Tiffany’s were my favorite movies as a kid. I wrote about Finley in a short story (which is free for my newsletter subscribers) a few years ago. She just kind of popped in my head. Another country girl from Georgia but a pool hall hustler. And her backstory kept seeping into my brain. Plus my readers who’d read Pig’N a Poke (the short story) had asked for more on Finley. I thought I’d just write another short story or short novella, but when I began mapping out the story, I realized full length was necessary to do her story justice. And after all this, it sounds like I’m addressing issues, but really and truly, I just want to provide the reader with a fun escape.”

Larissa did some readers have commented on The Cupid Caper being darker than her other books. “It’s got more of a thriller feel to it,” she said. “But potential readers should know, it’s still got humor, romance, and a mystery. And with all my books there isn’t anything explicit or any strong language. Even as a crime thriller mystery, it still maintains a PG-13 rating.” 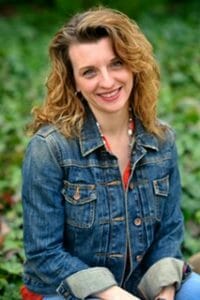 Larissa said when it comes to writing, she focuses on three things. The first is knowing and interacting with her readers.

“I mean this in a personal (not a marketing) way,” Larissa said. “I love reading their emails and chatting with them on social media. I even love writing my newsletters, because for me it’s almost like a pen pal thing. I keep it book focused but I think of it as a conversation. I have to set aside time the day after I send out a newsletter because many will write me back. And I write them back because I really want to know them. They’re real people to me, not just people who read my books.

Larissa said the third thing she focuses on is writing better and smarter. She added, “I think that must be true with all writers, so no need to expound on that.”

Larissa said she likes to do in-person research and bring her family along. Her goal is to make these outings fun for the entire family. She said, “I’m headed to the Big Foot Museum in the North Georgia Mountains this weekend for Mother’s Day. Big Foot research is for my next Maizie Albright mystery. But I hope it’ll be fun for my family. With The Cupid Caper, we spent a day at Oakland Cemetery while I did research for a foot chase scene. That led to our signing up for Malts and Vaults with friends, a historic tour of Atlanta’s brewers and their final resting places at Oakland followed by a local beer tasting. I highly recommend it if you’re ever in Atlanta. Particularly if you’re a fan of beer.”