You are here: Home / Author Interviews / Behind the story of As the Christmas Cookie Crumbles
Spread the love 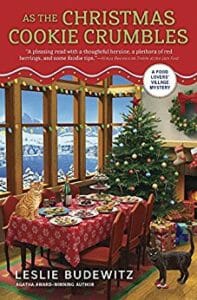 Leslie Budewitz is the author of the Food Lovers’ Village Mysteries and the Spice Shop Mysteries—and the first author to win Agatha Awards for both fiction and nonfiction. Her latest installment in the Food Lovers Village series is As the Christmas Cookie Crumbles. Let’s take a look at the story behind this new cozy mystery.

“I started writing at four on my father’s desk—literally,” Leslie said. “I did not yet grasp the concept of paper. But it wasn’t until years—decades—later that I actually thought I could be a writer. It’s the best job I’ve ever had. I’m always working on my craft, learning how to create an emotional experience for the reader, exploring some aspect of life and human experience, while keeping it fun.”

Secrets and a small town

“I’m always investigating community—what makes it work, what happens when it doesn’t, how it affects our daily lives. It’s often said that in small towns, everyone knows everything about everyone else, but it turns out that secrets are even more important where there is so little privacy. And often, what people think they know is wrong.”

The main character, Erin Murphy grew up in the small town of Jewel Bay, left, and returned. Leslie said, “That’s common in Montana—I did it, and I’m enjoying exploring the experience through the eyes of a younger woman. She’s sometimes surprised at the ways town has changed, and conversely, sometimes frustrated that people assume they know all about her because they knew her late father and remember the year she starred in the school play and won the Rodeo Queen crown. “

“Jewel Bay is closely based on the town where I live,” Leslie said. “It’s a town that calls itself ‘Montana’s Christmas Village.’ Visitors are always taken by surprise, particularly at the holidays, when every pillar and post is dressed up for the season. Since each book features a festival, I really wanted to recreate the local Christmas festivities on the page, so the book starts on what we call Decorating Day and ends on Christmas Eve.”

Leslie said that many years ago, she lived in a different small Montana town and the secretary of the small law firm where she worked was convicted of embezzling a large amount of money. This was the woman’s second offense. The lawyer who owned the firm knew she’d stolen from a previous employer years during a difficult period in her life, but had wanted to give the woman a second chance.

“After the theft was discovered—quite by accident—her parents shunned her, evicted her from her home, which they owned, and left town. I knew the family, and was never sure which was worse: her theft, or her parents’ reaction. Not long after, the credit union branch manager was accused of embezzlement and staged her own disappearance, although she was quickly found. I had an account there and had seen and chatted with her frequently for years. I discovered that embezzlers often follow the pattern that both these women fit, and wanted to dive into it further on the page.”

Leslie added that while she was writing As the Christmas Cookie Crumbles, she was surprised when she looked outside and saw blue skies and green grass. She said, “Writing a winter book in spring and summer messes with the mind! I wrote this book during my last year on the national board of Sisters in Crime, after serving as president in 2015-16. It was a huge time commitment, of course, but such a wonderful experience. I’ve never met a more generous group of people than mystery writers—except maybe mystery readers!” 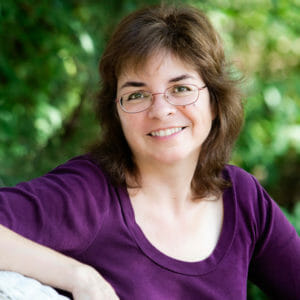 Watch what you say or do around writers

“My husband is a martial artist and helps me block out all the fight scenes,” Leslie said. “He’s also a doctor, which is enormously helpful to a mystery writer, although we have learned to not talk about poisons in a restaurant. When I wrote Treble at the Jam Fest, fourth in the series, we walked along a popular trail to find the perfect place for the victim to fall down the rocky cliff—we had to be careful what we said within earshot. It’s also fun to collect tales from local business people about strange incidents and interactions, and a few of them worked their way into Christmas Cookie.

“In a way, my life is my research, especially for the Food Lovers’ Village series. You just never know when something you tell me is going to end up on the page! For my Seattle series, I’ve greatly enjoyed getting to know merchants in Pike Place Market who tell me about daily life in the country’s oldest continuously operating public market. My annual research trips are a delight—and by research, of course, I mean eat!”