You are here: Home / Author Interviews / Behind the story of Southern Charm by Jocie McKade
Spread the love 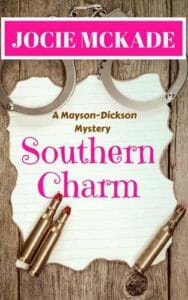 Jocie McCade likes to say she can find humor in almost anything, which is why she primarily writes romantic comedy and humorous cozy fiction. A librarian with a soft spot for U.S. Veterans, she chaired the Veteran’s Oral History Project and her work with the program led to her speaking before the Project committee and the U.S. Library of Congress. She has won several awards for her non-fiction writing on a multitude of subjects. For this interview, she talked about her new book, Southern Charm.

Not one to take things too seriously, when asked if Southern Charm dealt with any social issues, Jocie said, “My Mayson-Dickson series doesn’t have issues, um, well maybe a few. Alright, there are a few few moments of North -vs.-South, but in a fun way. One big issue in the book is Jackie’s hatred of the word ‘ain’t’, and Emme’s mockery of her Boston sister not realizing there is a letter ‘R’ in the alphabet. My lead characters seem to be very different from each other, almost polar opposites.”

For those not familiar with the series, Jackie is from Boston, is a Harvard educated, business-oriented woman with an MBA, who you’d probably find marching with a Support the ERA sign. Emme is from a small Alabama town, attended Auburn University, is an architect that loves NASCAR, and anything pink.

Jocie added, “The biggest issue, besides the obvious murder victims, LOL, it is that these two seeming disparaging personalities are actually pretty much alike. They both miss their hometowns, their parents, friends, their jobs, and while certain words, or lifestyles may be different, inside they value the same ideas. Yankee and Rebel both have the same hearts, the same feelings, the same fears. Perhaps that’s the issue? In today’s world, we need to realize as Emme would say; ‘We ain’t all that different.’ And Jackie would sigh, and reply; ‘Isn’t that the wicked truth.'” 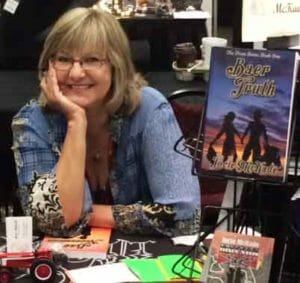 The idea for Southern Charm came about from Jocie’s mother. “She was a true Southern woman. I was my families first Yankee, but spent much of my youth in the land of Dixie. She used to tease me about being comfortable of either side of the Mason-Dixon Line. I can go from ‘y’all’ to ‘you guys’ in the same sentence! LOL My mama is the one I have to thank for my Mayson-Dickson series.”

Jocie also said she tries to stay positive about everything, but it doesn’t always happen. “There are days when I could bite the head off a tiger, but I try to pull myself out of there very quickly. I try to always find the funny in a situation. I make snarky remarks about pretty much everything. Oh, I sometimes find myself funnier than others do, and I snort.”

“While I was born and raised in Ohio, Boston has their own vernacular,” Jocie said. “Just see, ‘bang-a-uey.’ I’ve visited Boston, and I love that city, but getting around it, wow insanity. When I was there last time, I got rather lost. It was pouring rain, and I was experiencing my first N’Easter. Not daunted, I was determined to visit some historical sites. So, I splashed up to two Boston cops walking the street and asked how to get to Paul Revere’s House.

They both looked at me like I was a crazed woman.

“I got no idea.” The first officer said, looking at his partner. “You evah been there?”

They both looked at my map of the city, it was one of those tourist maps.

“We’re here.” I pointed to a spot on the map. Since they both looked confused.

“Well, then, I think it’s that way.” The first officer pointed in one direction.

“No, no, it’s that way.” The second officer pointed in the opposite direction.

Since the snark in me was running strong and I was cold and rain-soaked I replied, “You know NYC cops know where their landmarks are.”

“Huh.” The first office gets on his radio and finds the directions.

On the way back I took them two cups of coffee, and said they should visit the Revere house sometime, it was really a Boston treasure.

In the latest Mayson-Dickson book Southern Charm, the murder victim is found in a magnificent sand sculpture on the beach. Jocie said, “If you’ve never been to a sand-sculpture exhibit go, the artwork is jaw-dropping. My husband and I were visiting Virginia Beach, where Mayson and Dickson live, and went to the town’s annual Neptune Festival. The festival features a world-class sand sculpture event. Artists from around the world come here to exhibit their art.

“We are walking through the exhibit, and a slab of sand falls from a sculpture, not a big one, but enough it frustrates the artist. I stop, stare at it, and at the artist trying to save his gorgeous work from becoming a sand pile, and I look up at my husband and say, ‘What a great place to hide a dead body.’

“Now, picture if you will a tent filled with artists, tourists and of course security, ie., police, and me saying this so happily and loud you would have thought I’d just received a winning lottery ticket. Needless to say, my husband, piped up and informs the now silent tent; ‘It’s alright, she’s a mystery writer.'”

Learn more about Jocie at jociemckade.com.