You are here: Home / Author Interviews / Behind the story of Magick Run Amok by Sharon Pape
Spread the love 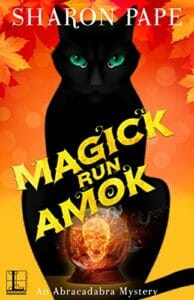 Sharon Pape is the author of Magick Run Amok, which is the third book in the Abracadabra series of cozy mysteries with a paranormal twist. While she typically writes cozies for pure entertainment, this time Sharon decided to do something a bit different.

“I don’t usually address serious issues in my cozy mysteries, because I write them as entertainment,” Sharon said. “However, Magick Run Amok is my first cozy mystery to address an important subject. It’s something we all see every day: people driving and texting. The ideas for this third book in the Abracadabra series were twofold. Not only did I want to shine a light on the problem of distracted driving, but I also wanted to let the characters figure out why they’ve been having trouble with their magick since the beginning of the series.”

Writing and other passions

Sharon said that while writing has been a lifelong passion for her, there are many other sides to her life. “Before my children were born, I taught French and Spanish on the secondary level. I’m a devout animal lover as long as the animal has no more than four legs. (Hopefully I won’t be sued for limb discrimination by the eight-legged out there.)” 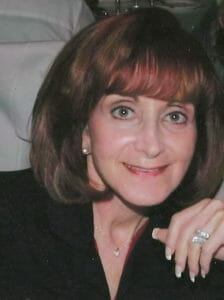 After Sharon contracted breast cancer at the age of 45, she and her surgical oncologist, along with two other survivors, started a nonprofit organization to provide peer support and information to newly diagnosed breast cancer patients. The organizaton provides service to men as well as women and is called Lean On Me.

“The organization has already provided services for thousands of women and men on Long Island and is still going strong,” Sharon said. “The dozens of survivors we trained to provide the peer support are among the most terrific people I have ever known.”

“This book was difficult to write, because I was spending a lot of time helping to care for my mother who had developed dementia in her 90s. As an only child, all the decisions regarding her were mine alone to make, even though my husband and adult children were always there to support me. During her final days, when she was in hospice care and unresponsive, I sat at her bedside doing the final edits for this book.”