You are here: Home / Author Interviews / Behind the story of Don’t Believe It by Charlie Donlea
Spread the love 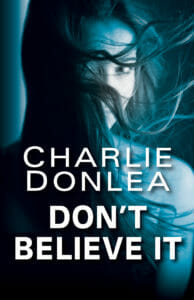 Charlie Donlea is an international bestselling author. His latest, Don’t Believe It, is his third novel. Charlie believes a novel must call to a reader for it to be read and writes accordingly.

No issues, but there is a thread

“My novels are meant for pure escapism reading, so I don’t see them as tackling social issues in any grand form,” Charlie said. “However, a common theme between all three of my novels is society’s obsession with missing persons cases and unsolved murders. Pop-culture magazines frequently feature on their covers missing girls, some of whom have been found after being missing for years. The common questions include how they were taken, why they didn’t escape sooner, and how they are readjusting to freedom.”

The first novel, Summit Lake, dealt with a father’s attempt to keep his murdered daughter out of the tabloids as a tenacious investigative reporter arrived in the small town where the murder took place looking for answers.

The Girl Who was Taken tells the story of two abducted girls, one who returns and another who does not. The girl who makes it home goes on to write a bestselling memoir that thrusts her into the public’s eye and draws attention to parts of her story she wants to keep secret. In researching novel, Charlie visited a morgue to view an autopsy. He still recalls his reaction. “Let’s just say that noodled legs and a fuzzy head made the experience less than stellar.”

Don’t Believe It taps into the public’s obsession with true crime documentaries and tells the story of a filmmaker creating a weekly-serialized documentary that delves into the grisly details of a decade-old murder that took place in the Caribbean, and which explores the enigmatic woman who has been convicted of the crime.

“The common thread among all three stories is the public’s unquenchable thirst for the morbid details of disturbing stories,” Charlie said.

A fascination with true crime

“I’m a true crime junkie,” Charlie said. “The podcast Serial hooked me, and Making a Murderer gave me an affliction. Since then, I’ve binge watched just about every true crime documentary on Netflix. My biggest complaint about these films is that they tend to raise more questions than they answer. So I decided the story of a documentary filmmaker uncovering the secrets of ten year-old murder not only provided a great premise for a timely novel, but also gave me the ability to create as wild an ending as my imagination could conceive. I hope readers feel that the finish of Don’t Believe It not only ties up loose ends in a way real documentaries seldom do, but also provides a shocking ending that will have them ripping back through the pages to see how they missed it.”

Competition on all fronts

“I am a true believer that in order for a novel to be successful, it has to call a reader back to it after they put it down. If a book is easy to put down and hard to pick up, most readers—including myself—will give up on it. I’m hyperaware of this fact when I write. I know there is fierce competition out there from other books, television, movies, and more. So, I try to make it hard for readers to put my books down. And I make damn sure to include in the pages enough reasons for readers to pick them up again after they do.” 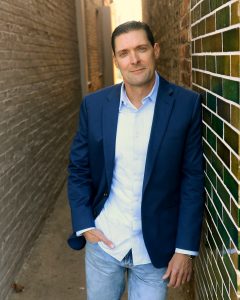 The setting of Don’t Believe It is a tropical resort in St. Lucia called Sugar Beach Resort. It’s a resort on the Jalousie Plantation that Matt Damon commandeered to renew his wedding vows. Charlie said he and his wife discovered the resort while visiting the island on Spring Break with their kids. “I thought it would make the perfect location for my novel. So much so that my wife and I returned to Sugar Beach the following year to celebrate our anniversary and do some much needed research to boot.

“My Matt Damon connection comes from a St. Lucian guide who worked for Sugar Beach. I hired him to take my wife and me on a tour of the island for my research. We asked if he drove Matt Damon or any celebrities around the island. No, he told us. But he did transport Damon’s photographer back to the airport after the vow renewal. Close enough.”