You are here: Home / Author Interviews / Behind the story of Cinco de Murder by Rebecca Adler
Spread the love 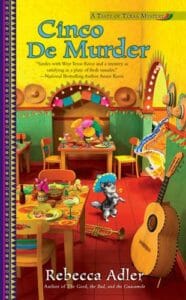 Rebecca Adler has always had a flair for the dramatic. In fact, this Florida girl says she was drawn to New York by “the sweet smell of wishful thinking. “While in New York, she studied acting on Broadway until romance came her way. Or, as she puts it, “a dark-eyed cowboy flung her over his saddle and hightailed it to the Southwest. “While there may not have been an actual saddle, there is a story behind Rebecca’s latest Taste of Texas Mystery, Cinco de Murder.

“My childhood dream was to be a director,” Rebecca said. “I fleshed that out in elementary school by writing the plays, casting the popular kids, and creating the performances for my friends and teachers to applaud. Fast forward several years and I’m still at it. My day job is corralling high school theatre students, my  artistic outlet is creating characters in my own original stories, and my joy is encouraging my son, who is also an actor and director.”

Though she lives in an urban area of Texas, Rebecca said her heart yearns for the beauty of Big Bend Country. “That’s why I placed my story near Big Bend National Park in a town nestled between the Chisos and Davis Mountains and the Chihuahua Desert. It made the perfect excuse to do research in Alpine, Fort Davis, Stockton, and their weird cousin Marfa.”

Rebecca confesses that her amateur sleuth can come of as a bit of a ditz in the beginning of the story. “But, she’s very committed to protecting her family and friends. She’s had to overcome the adversity of being jilted at the altar and being laid off from her dream job without losing hope for a brighter future. These life-altering experiences may have brought her unexpectedly back home to the small town she left behind; but she’s not bitter. If there’s any message in my books, it’s probably to embrace the challenges life throws your way. You’ll be stronger for it…and you’ll have a better story to tell.”

Separating their characters from themselves can be a challenge for any writer. And, in Rebecca’s case, she said it would have been so easy to write her sleuth with the same sensibilities and temperament. However, Rebecca knew that a sensible sleuth simply wasn’t going to work. “I had to put my foot down and allow her to go her own way,” Rebecca said. “As a result, she’s braver, less cautious, more impetuous, and definitely more willing to put herself in harm’s way to ferret out the truth.”

Ferreting out the story

“Visiting Marfa, Texas is always a blast,” Rebecca said. “Where else can you go in the dead of night to see alien lights bounce across the desert sky? And have you seen the Prada store in Marfa? Performance architecture at its weirdest. In the same area near Fort Davis, the McDonald Observatory sits smack-dab in the middle of a Dark Sky Zone, providing an out of this world view of the stars and planets that fill the night sky.

“In the name of research, I once made the mistake of climbing Enchanted Rock in the Fredericksburg, Texas area by myself. Though considered a moderate hike for a hiker, I’m NOT a hiker. Though only a mere climb of the equivalent of thirty stories high, Enchanted Rock is the largest pink granite Monadnock, isolated mountain, in the United States. My heart was beating so hard, I was convinced it would actually leap from my chest. No idiom intended.”

Like other writers with a day job, Rebecca can find it difficult to find the time to write that next book. She said she vows to write daily, but often finds herself merely writing on weekends, holidays, and summer vacations. “A great perk of teaching is the summer vacation. Being an artistic type, I’m easily distracted by…well, everything. A couple of years ago, I had almost an empty nest, the perfect atmosphere for writing. Now two of my hatchlings have moved back in on a full-time basis, and life is even more chaotic than before.”

Even though she has that chaos around her, Rebecca has found a way to stay on task. She said, “I seem to make the most progress when I chart my progress daily using spreadsheets. I also write in a chat room at times with my writing buddies, either checking in at regular intervals are doing writing sprints. If I don’t chat too long, I find the accountability works wonders.”