You are here: Home / Author Interviews / Behind the story of Death by a Whisker by T.C. LoTempio
Spread the love

Behind the story of Death by a Whisker 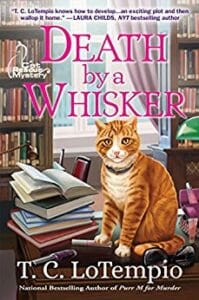 “I started out writing supernatural suspense, “ LoTempio said. “I would say the most enjoyable thing I’ve ever done and could also be considered the craziest, is learn to read the Tarot! People would be surprised to learn there’s a whole science behind it, and I actually got pretty good at it, although I’m hardly qualified to hang out my shingle as a pro!”

The Tarot might have been interesting and fun for LoTempio, but her love of animals led her to cozy mysteries. “Each year shelters all around the country adopt humane policies and practices to save animals’ lives. Even though I concentrate mainly on cats in the series, I am a huge advocate of shelters for all animals. Shelters and organizations like Alley Cat Allies protect cats not just in the United States, but everywhere in the world. I hope that in setting the series in an animal shelter I can make people aware of just how much these are needed and we should all do what we can to help.

Animal rights and its importance

“I’m a tireless advocate for animal rights and organizations such as Alley Cat Allies and the Humane Society. It’s funny, I can watch murders on TV but I can’t abide seeing an animal die or be killed (I have NEVER seen or read Old Yeller and I have no desire to. I read Cujo once and never picked up the book again; and let’s not even talk about Bambi).”

In addition to her interest in animal shelters, LoTempio is also an avid shopping channel watcher. She said, “I have to admit there are a few hosts and merchants that I wouldn’t mind killing off. I’ve changed the names to protect the innocent LOL. I did have one particular merchant in mind that the character of Ulla is based on, but I’ll never tell who it is!”

Once ROCCO got a look at the camera lens he took off like a shot.

When LoTempio sold her first series, Nick and Nora, to Penguin and was having her author photo taken, she and her editor decided to include her cat in the photo. “We thought it would be nice for the author photo to be of me and my cat, ROCCO (who writes his own blog and on who the character of Nick is based) I have a friend who is a photographer who said he would come over and take the photo. Well, once ROCCO got a look at the camera lens he took off like a shot.

“We chased him all over the house. I finally cornered him in my closet but he dug his claws into the top of one of my bins and wouldn’t let go. We finally had to stop because the cat was panting so hard I thought he was going to have a heart attack. I called a friend of mine at the Clifton Animal Shelter—where I adopted ROCCO—and fortunately she had a lovely tuxedo cat there named Fred who was almost an exact double for ROCCO. So, the cat in my author photo for both series is not ROCCO, but Fred! ROCCO is probably the only cat I know who has a body double.”

Learn more about T.C. LoTempio on her website at www.tclotempio.net or on ROCCO’s blog at catsbooksmorecats.blogspot.com.