You are here: Home / Author Interviews / Behind the story of Paul Levine’s Bum Luck
Spread the love 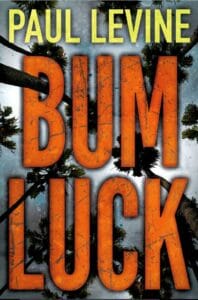 From small screen to page

“Both writing for television and writing novels are rewarding and challenging in their own ways,” Levine said. “On television, it’s a shared responsibility. Director-showrunner-actors-network executives. The vision doesn’t belong to one person but is diffused. With novels, the writer is a one-person band.”

While Levine prefers the independence of writing novels, he enjoys the pace of TV writing. “There’s something about the immediacy of television—script to air in six weeks—that is appealing. Also, I believe television scribbling helped my book dialogue.”

Levine said, “Justice as an ideal is an underlying theme for me. The difficulty of achieving justice is the heart and soul of Bum Luck and the entire Jake Lassiter series. That’s reflected in Jake’s inner voice with lines like, ‘Justice is the North Star, the burning bush, the holy virgin. When you fail to attain it, fight for the next best thing. Rough justice is better than none at all.’”

The burning issue behind Bum Luck

Attorneys defend guilty clients all the time—and that knowledge is also behind the Lassiter series. “The dilemma of a lawyer defending a guilty client has always fascinated me,” Levine said. “In Bum Luck, Jake Lassiter seeks vengeance, or vigilante justice, against his own client.”

That’s right, Jake Lassiter, in the opening lines, announces his intention to kill his client. “Why would Lassiter, after all these years representing guilty clients, feel this way?” Levine said. “He might be very ill. Remember that he’s a former second-string Miami Dolphins linebacker who went to night law school and became a trial lawyer. In Bum Luck, Lassiter suffers symptoms indicating he may be in the early stages of always fatal Chronic Traumatic Encephalopathy (CTE).

“The idea came from a close friend of mine, a former football player and international rugby player, who died of CTE. It affected me deeply. We know that hundreds of former NFL players have succumbed to traumatic brain injuries caused by repetitive concussions and thousands more will die in the future. It’s a tragic situation, compounded by the NFL’s stubborn resistance to admitting the truth for so many years.”

Levine said his primary goal is to entertain. “That starts with character. I aim for rich, complex, layered and often humorous characters who tell me the plot.”

What: This month, Paul is giving away one soft cover copy of “Bum Luck” and I’m adding a $5.00 Starbucks gift card. One random entry will be chosen as the winner. Winner will receive a book and a gift card.