You are here: Home / Author Interviews / Behind the story of Town in a Maple Madness by B.B. Haywood
Spread the love 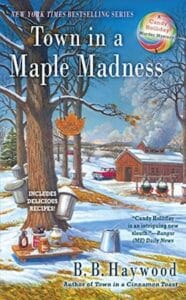 B.B. Haywood is the pen name for the writing team of Beth Feeman and Rob Feeman. Their most recent book is Town In A Maple Madness. The story takes place in mid-March, at the height of Maine’s maple sugaring season, when the days are warming and sap is flowing through the sugar maple trees.

The muddy road and a news story collide

“Town In A Maple Madness is the eighth and final book in the Candy Holliday Murder Mystery series,” the Feemans said. “With every book, we have tried not only to tell an entertaining and suspenseful story, but also to give readers an idea of what it’s like to live in Maine and New England, a unique region of the country with a long history and a varied landscape, ripe for mystery writers.”

The initial idea for the story came after an article appeared in the “Portland Press Herald” (Portland, Maine) about sap stealing. “That became the germ of an idea that drove our story. There have been some conflicts in the region over sap stealing, and at least one sugar shack was burned down because of related problems.”

For six years, the Feemans lived at the end of a long dirt road in rural New Hampshire. Every spring, the road would turn to mud, just around the time the sugar maple trees were being tapped for their sap. “As we drove down the road, we could see plastic tubing running from all the maple trees, like a giant spiderweb, channeling the sap to big collection tubs. It was a fun but treacherous time (due to mud season) in our corner of the woods, so we used those memories of New England life as a starting place for this story.”

The Feemans also said with this last book they wanted to wrap up the series on a high note for their protagonist, Candy, and the other villagers in Cape Willington. “We created a fictional event, Maple Madness Weekend, which is tied in to a true-life event in Maine, called Maine Maple Sunday. It’s when all the sugar shacks in the state are open to the public. We also drew on frequent trips to Parker’s Maple Barn, a pancake house and favorite family dining spot in rural New Hampshire. So all of that provided a backdrop for a story about sap stealing, which is a very real problem in New England.”

In Town in a Maple Madness, when one of Candy’s neighbors is accused of stealing the sap from a rival’s maple trees, and the body of a popular landscaper is found floating in the English River, Candy finds herself in the middle of a sticky situation, and sets out to solve both crimes.

“Just about everything we write about in the books is drawn from our real-life experiences exploring New England with our family while our kids were growing up. We lived, at various times, in Massachusetts, New Hampshire, and Maine. We explored all those states extensively, as well as Rhode Island, Connecticut, and Vermont, where our oldest child attended college.

“We all loved New England’s many festivals and events, little villages, rural atmosphere, historical places, crafts and culture, ice cream, lobster rolls, and, of course, the people we encountered. All those trips and observances made their way into our books.”

In addition to providing local flavor, the B.B. Haywood books focus on entertainment. “We work extremely hard during the writing process to make sure the reader is entertained. Our primary goal is to make sure readers love the story and characters enough to read to the end of the books. We strive never to bore readers or waste their time. We simply want to tell good stories people enjoy reading since that’s what we love as well.”

Two minds instead of one

When they were plotting Town In A Wild Moose Chase (Book #3), Beth wanted to include a big formal dance called the Moose Fest Ball at the end of the book. Rob couldn’t figure out how it would fit into the story. “After talking it through, we decided not only to include it, but use it as a climax to the story. It just takes time to figure out where the story goes and what fits into it. We also have endless discussions about the titles for each book, and have a list of 50 to 75 titles we’ve come up with.”