You are here: Home / Author Interviews / Behind the story of Blood Trails with Diane Capri
Spread the love 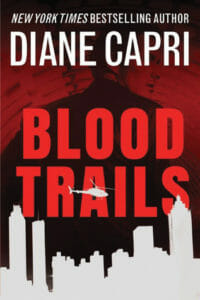 “Every new book begins with a spark that leads to an idea I can turn into an exciting story,” Capri said. “In the case of ‘Blood Trails,’ the idea was sparked by a friend’s amazing good fortune. She was contacted by a ‘land man,’ whose job was to locate Oklahoma mineral rights heirs. The contact was not a scam and she eventually received quite a windfall. Her situation made me wonder about all of the other heirs out there who are eligible for significant sums of money but don’t know it.”

Capri said she spent a long time finding the perfect name for her heir hunter of last resort. She asked her readers for suggestions, and they came up with hundreds of names. “Some of the suggested names were hysterically funny,” Capri said. “I kept a list and they may turn up in a Flint story one of these days. Flint is the guy you turn to when all else fails. He’s a P.I. with a mercenary streak and a heart of gold who can find anyone, any time, anywhere, dead or alive—for the right price, of course.”

In “Blood Trails,” Michael Flint claims he can locate anyone. But, finding people is tricky business. “Situations involving missing people and missing information fascinate me,” Capri said. “Perhaps it’s the very human need for closure or simply my mystery writer’s drive to figure things out. Either way, I want questions to be answered and problems to be solved, to know where missing people are, how they went missing, and why.”

Of course, heirs can have many different situations. One of the scenarios Capri wondered about was what if the heir had been running from the law? She said, “I wondered what if Michael Flint was hired to find the heir after everyone else had failed? What would happen if Flint failed, too?”

While she now splits her time between Michigan and Florida, Capri once traveled extensively. She’s visited many places she loved, including Greece, Italy, and Hawaii. “I had quite a few adventures in flying—some of which have made it into my books. But I think the perfect setting for many of my stories is Florida. I visited Florida when I was in college and fell in love with the place. Reading Travis McGee novels back then bonded me to the Sunshine State. I hope I can always live there— even as my characters travel the globe!”

The most important thing for Capri is whether her readers enjoy her books. She also likes to use her experience as a former practicing attorney. She said, “I spent years uncovering secrets and solving mysteries in real life. Those experiences have helped me create exciting, clever, twisty plots, great characters, didn’t-see-it-coming endings, and almost touchable settings with loads of atmosphere. If stories with these qualities appeal to you, you may want to give my books a try.”