You are here: Home / Author Interviews / Behind the story of Unholy Code with Thomas Waite
Spread the love 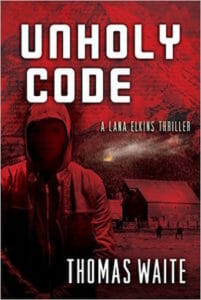 Cybersecurity is one of those issues most people find frightening and daunting. In his third Lana Elkins thriller, Thomas Waite again throws the reader into the world of hackers, attackers, and shadowy secrets. “Unholy Code” deals with racist rhetoric and the spread of both foreign and domestic terrorism.

“Unholy Code” takes place in the near future, in a world Waite calls recognizable. “A major reason that world feels so real is that the conflicts that threaten to tear us apart as a nation are based on what we can glimpse of the world around us right now.”

Waite said the idea for “Unholy Code” grew out of several disturbing societal trends he has observed. These include the increase in nativism and xenophobia, anti-Muslim propaganda, and incidence of hate crimes. He said, “The ISIS trail of terror was continuing apace, with unthinkable horrors being committed by this jihadist militant group.  So I envisioned a future America faced with white supremacists and jihadists, with terrorists both domestic and foreign, and with an unholy alliance of our most fanatical enemies.”

Having spent most of his life in the technology field, Waite naturally finds himself reading about cyber attacks and cyber warfare. “What I learned was truly frightening,” Waite said. “As a writer of thrillers, it struck me that the public was largely unaware of a potential cyber war of cataclysmic proportions from an unseen enemy. I saw this as an opportunity to write a rather unique series of thrillers.”

Even though my novel is fiction, it’s still disturbing to see this perverse version of ‘life imitating art.’

Waite didn’t think the world needed another stereotype macho male figure and chose a different route. He created Lana Elkins, a former NSA operative, who heads a cyber security firm. Waite joked, “Despite what I write, I’m actually a very normal, peaceful guy with a good sense of humor and a lot of optimism. Really, I am!”

While working on “Unholy Code,” several frightening parallels to the book occurred. He said, “I was well into the book when the Charleston church shooting took place, only to be followed by the attacks in Chattanooga, Colorado Springs, and San Bernardino. Similarly the tone of the US presidential race and the xenophobic proclamations by some supports of the Brexit movement were things I couldn’t have anticipated.”

Just one week into the promotion of “Unholy Code,” the deadliest public mass shooting in the US. took place in Orlando. “Even though my novel is fiction, it’s still disturbing to see this perverse version of ‘life imitating art.’”

Waite has seen these types of parallels before. His debut novel was a murder mystery titled “Terminal Value.” The book involved the buyout of a startup mobile-computing company. The takeover was being conducted by a large information-technology company and was about to go public. Waite used the transaction to explore the dark side of corporate America.

In the Lana Elkins series, Waite explores the potential convergence of computer science with other traditional terrorist threats. “The books looked at the harrowing impact cyber war and cyber-sabotage could have on deep environmental vulnerabilities caused by climate change.”

The antagonists in “Unholy Code” are cyber-savvy with advanced hacking skills. “Throughout, I consulted with experts to help ensure that the technology was accurate without overburdening the reader with unnecessary detail and overly technical language.”

Waite said he was once asked if perhaps he was giving too much away and inadvertently aiding potential cyber-terrorists. “It’s hard for me to believe that most of what I come up with hasn’t already been the subject of cyber-war-game scenarios in the Department of Defense.  If I’m presuming too much about the Pentagon, then we’re really in trouble.”