You are here: Home / Author Interviews / Behind the story of Sympathy for the Devil
Spread the love 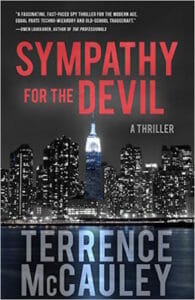 Terrence McCauley is an award-winning writer of crime fiction. His first techno-thriller is “Sympathy For The Devil.” McCauley has also written gritty thrillers set in 1930 New York City. He researched the era by buying countless books on mobsters and prohibition. He delved into World War I, the Great Depression, the Jazz Age, and much more from the 1930s. McCauley jokes about having enough books stacked up to make getting out of bed in the morning dangerous.

“I was comfortable writing novels and short stories set in 1930s New York,” McCauley said. “I’m a native New Yorker and a history buff, so it was great fun to spend some time getting to know that era. It was so much more interesting and relatable than the great Cagney films of the day. The fact that the first two novels received a fair amount of acclaim made it easier for me to consider writing in that particular time period for the rest of my career.”

McCauley made a change at the urging of a friend. “He suggested I try my hand at writing a spy thriller. Not a sleek, glitzy spy thriller, but something unique that would fit into my gritty style. I didn’t think that was the kind of writing I wanted to do, but the more I thought of it, the more I realized that I had always wanted to advance the events of ‘Prohibition’ and ‘Slow Burn’ into the modern era. So, I skipped about eighty years in the plot timeline of those books and wrote ‘Sympathy for the Devil.'”

I wanted to tell a new kind of spy story that used technology, but didn’t have the predictable quirky, rebellious hacker geek that we’ve seen in so many stories.

McCauley wanted to carry the themes of his earlier novels forward. To accomplish his goal, he needed to introduce current-day versions of the organizations from his first two books. McCauley said he gave the world more depth and developed the threats. “It winds up being a much larger, more sinister threat than anyone had previously thought, which set up the next book in the series nicely.”

McCauley said, “I didn’t want to tell the same old story of the special forces operative getting pulled back into service by extenuating circumstances. I certainly didn’t want anything that could have a war-room scene where a president turns to the head of an intelligence agency and says, ‘Send in Hicks’ [the protagonist].

“I wanted to tell a new kind of spy story that used technology, but didn’t have the predictable quirky, rebellious hacker geek that we’ve seen in so many stories. I also didn’t want a sleek room full of the latest equipment manned by people who look like they just stepped out of a J. Crew ad. And I certainly didn’t want to have a protagonist who has a bunch of gadgets like exploding pens or poison-tipped umbrellas.”

“Sympathy For The Devil” and its sequel, “A Murder Of Crows,” are a different type of spy thriller. McCauley said, “These aren’t your father’s kind of spy novel. They’re not supposed to be. And I wouldn’t write them any other way.”

McCauley is always striving to improve. “I’m always trying to find new ways to tell a story. Variety keeps me fresh and prevents me from becoming predictable. I write novels, novellas and short stories. I write in different voices with different tones. I try the same kind of variety with my short stories. The story is never about the man with the gun. It’s about why the man with the gun is holding the gun in the first place. In some cases it’s about why the man doesn’t have a gun at all but kills his quarry just the same.”

The sequel to “Sympathy for the Devil” is titled “A Murder Of Crows.” Reader reactions to the title surprised McCauley. “I’ve lost count of the number of people who have read the synopsis, thought it was interesting, but asked ‘What does it have to do with dead birds?’ That’s when I explain to them that a group of crows is called a ‘murder,’ just as a group of geese is called a ‘flock.’ The various agencies and entities pursuing Hicks are the crows, and since there are several agencies involved, it’s called a ‘murder’.”

McCauley said he thought more people knew what a murder of crows was. “I’ve since found out I was wrong. So, for the record, no crows were injured or murdered in the writing of this book. Hicks doesn’t kill any crows, either. Well, not real crows. Not the flying kind, anyway.”