You are here: Home / Author Interviews / Behind the story of Wolf with Kelly Oliver
Spread the love 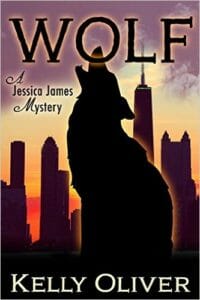 Kelly Oliver is the author of thirteen scholarly books, ten anthologies, and more than 100 articles. She’s done work on campus rape, reproductive technologies, women and the media, film noir, and Alfred Hitchcock. So why did she turn to writing fiction? The answer lies in the pages of her Jessica James Mystery Series and the story behind the first installment, “Wolf.”

“‘Wolf’ is inspired by my own experience in graduate school,” said Oliver. “When I got my Ph.D., I was one of the very few women in the philosophy program at Northwestern University, and it was rough. As an undergrad at a Jesuit college and then in a philosophy Ph.D. program, I never once had a woman professor for any of my classes. So, I had very few role models.  Luckily, today things have changed.”

Kelly Oliver believes most women in graduate schools, regardless of their disciplines, can relate to her protagonist, Jessica James. “She swims against the current in an ocean of men,” said Oliver. “I plead the fifth on which parts of the novel are true and which are made-up.”

In her scholarly work, Oliver has written about campus rape. For “Wolf,” she decided to handle the problem through her fiction. “Wolf” includes a date-rape conspiracy plot at an on-campus fraternity. She decided to address the issue after reading near weekly headlines about the epidemic of on-campus party-rape.

“Since ‘Wolf’ is set at a university, and features strong female protagonists. It seemed important to include,” said Oliver. “There aren’t any rapes in the pages of the novel, just our kick-butt heroines stopping rape, and teaching the frat boys a lesson.”

In graduate school, my working class backwoods grit served me well. And much to my parent’s surprise, I’ve managed to feed and cloth myself as a professional philosopher.

In “Wolf,” Jessica James and her best friend, a beautiful Russian named Lolita, rescue Lolita’s roommate at a frat party where the punch is spiked with the popular rape drug GHB. “They literally give the frat boys a taste of their own medicine when they force them to take the GHB,” said Oliver.

In her second novel, “Coyote,” Oliver said she takes on the issue of fracking on the Blackfeet Indian Reservation in Montana. “Unfortunately, the oil industry brought not only pollution but also drugs and prostitution to the Reservation. Based on true stories, ‘Coyote’ brings Jessica James back to her Montana roots where, along with her roommate for the summer at Glacier Park Lodge, Kimi Redfox, she has to track down and stop human traffickers who kidnapped Kimi’s little sisters.”

Kelly Oliver grew up in Montana, Idaho, and Washington. Her maternal grandfather was a forest ranger committed to saving the trees while her paternal grandfather was a die-hard logger. “On both sides,” said Oliver, “my ancestors were some of the first settlers in Northern Idaho. I went from eating a steady diet of wild game shot by my dad to becoming a vegetarian while studying philosophy and pondering animal minds. In graduate school, my working class backwoods grit served me well. And much to my parent’s surprise, I’ve managed to feed and cloth myself as a professional philosopher.”

As a philosopher, Oliver said she was trained to get right to the point and hit readers over the head with her thesis. “With mystery,” she said, “you have to do the opposite and hide the point, meander along, and create suspense. That’s why I thought I’d never be able to write fiction. I’ve always been too much of a straight shooter.”

At some point, Oliver realized she enjoyed philosophy because it was similar to being a detective. “You read confusing stuff and try to piece together its meaning from various clues—like trying to figure out the meaning of life. So in that regard, maybe writing philosophy isn’t such a far cry from writing detective novels. Both are about following the breadcrumbs to see where they lead.”

Find Kelly Oliver on the web at kellyoliverbooks.com.