You are here: Home / Author Interviews / Nancy Cole Silverman tells the story behind Without a Doubt
Spread the love 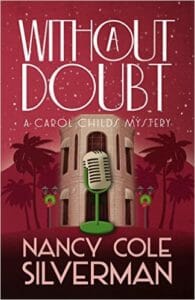 Nancy Cole Silverman enjoyed a long and successful career in radio. During those days in radio, Silverman didn’t realize she was destined to be a writer. Her Carol Childs Mystery series takes advantage of her knowledge about radio news while letting her exercise her creative side. Without a Doubt is the latest book in the series. Without a Doubt was inspired by the response Silverman received when she posed the question, what would happen if a Hollywood Star had to attend an awards show without her jewels?

Silverman said, “An actress friend of mine, who shall remain nameless, said she’d rather walk naked down that red carpet than forsake the opportunity to wear a pair of pearls from Harry Winstons. Right there I knew I had my story.”

The question Silverman asked really came about because she’d been thinking of tackling a lighter subject for her third Carol Childs Mystery. “I had just finished writing Beyond a Doubt. The topic was sex trafficking and the research was pretty heavy and often depressing. While the kidnapping and violence take place off the page, I still had to live with the characters and development of the plot for well over a year. When I finished the book, I was ready for something a little lighter. A Beverly Hills jewelry heist seemed just the thing.”

Not one to be completely satisfied with writing fluff, Silverman also wanted to address the issue of relationships in the workplace, both personal and professional in Without a Doubt. She said, “Carol is a middle-aged woman, starting over mid-career as a journalist for the radio station where she has been working in sales. It’s an opportunity she’s excited about and anxious to prove herself. But, Carol’s boss, doesn’t approve of her [working/professional] relationship with FBI Agent, Eric Langdon. In this book we see just how challenging that can be.”

Back then, women didn’t do heavy news.  Most of what I covered were chick-lite stories.

Having come from the radio newsroom herself, Silverman had seen firsthand how politics, sexism and ageism all played a role in the business and wanted to bring those elements into the plot. “I worked in talk radio for almost twenty-five years,” Silverman said. “I feel like I grew up in a newsroom. I began my career in Arizona in the very early 70’s where I was one of the first women in a newsroom.  Back then, women didn’t do heavy news.  Most of what I covered were chick-lite stories.”

By the 90s, however, the world of radio had seen many changes. Silverman had more latitude. She could cover news stories. And, she had a good one. She said, “I had leased a rental property to a family that moved in and refused to pay the rent, but claimed the property was no longer part of the United States of America. I soon found out they were part of a group of supporters of The Montana Freeman and were preparing to use my house as their Southern California headquarters for their new country.

Pretty soon, nearly every television and radio station in town had caught on to the fact we had an extremist group in our own backyard.

“When I contacted the FBI they explained they had been watching my house, but had their hands full with the group in Montana, who, like the family in my house, were declaring themselves patriots and wanted to secede from the country. The FBI said they didn’t want to do anything that might excite the group and lead to another Ruby Ridge or Waco, Texas incident.”

Silverman also learned the FBI was aware the family had guns and ammo in the house. “They said I would be wise to stay away. While I understood this, I still needed to make payments to the bank and my tenants weren’t paying me. Finally, after this had gone on for better than six months I decided I’d turn this into a news story.”

At the time, Silverman had access to a talk radio station. She went public with the story. “Pretty soon, nearly every television and radio station in town had caught on to the fact we had an extremist group in our own backyard. I offered to put my tenant on the air and when I did, the FBI suddenly got interested in what I was doing and within days, the group was arrested and I got my house back. And, I’m proud to say not a shot was fired.”

When she started writing fiction many years later, the incident was inspiring enough for her to adopt the tagline: Where brains beats brawn and a mic is more powerful than a forty-five.

Immediately after leaving radio in 2001, Silverman founded and published an equestrian newspaper. “I was literally in my heyday, playing at the barn with my horse and writing stories for the newspaper while attending competitions. In 2008, I had a series of bad riding accidents.”

The last accident was severe enough to prevent Silverman from riding again. “It was during my recovery that I started the Carol Childs Mysteries,” Silverman said. “I never thought I would find something that I loved as much as riding. But I did. It’s writing.”