You are here: Home / Author Interviews / Connie di Marco and The Madness of Mercury
Spread the love 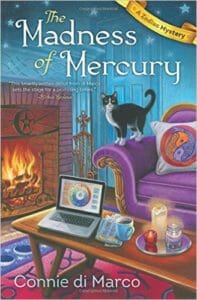 Astrology is a fascinating, and controversial, subject for many readers. Some call it bunk, others won’t make a move without consulting their chart. For Connie di Marco, astrology created the perfect background for her Zodiac Mystery series, which begins with The Madness of Mercury.

“I think writers pull together stories from very diverse threads,” said di Marco, “perhaps not always aware that something they’ve read or stumbled upon, seen or heard, will end up in a book. And those things can percolate for a long time until they’re pulled out of the closet of an author’s brain when needed.”

Di Marco lived in San Francisco during the heyday of Jim Jones and the People’s Temple. She said, “Bear in mind, at that point in time, the deaths in Guyana had not taken place and Jones was admired and revered for his ‘good works’—soup kitchens, day care for children, retirement facilities. He was supported by both politicians and society people. I thought that setting the mystery against a similar background could make life very interesting for my protagonist.”

When di Marco is planning a story, she never thinks about issues or themes. “It’s the psychology of the crime, the mindset of the victim and the killer that is interesting to me. I might think about the broad circumstances of a crime, for example, human trafficking, missing persons or child abductions. So I’m always amazed when I realize I’ve written something that has any sort of a theme or message. Perhaps it’s my unconscious taking over!”

Although di Marco had lived in San Francisco, she felt a need to research the city when she decided to set The Madness of Mercury there. What she discovered were issues she hadn’t been aware of previously. “I was shocked to realize how much power Jones and the People’s Temple really wielded in the city, probably far more than my venal character, the Reverend Roy.”

I think of astrology as the next of kin to psychology, a frame of reference useful for character analysis.

Di Marco is confounded by the willingness of people to abdicate their autonomy to a group, whether it’s political, religious or otherwise. She portrayed this by having her protagonist, Julia, suggest a woman engage an attorney when a church pressures the woman’s mother to turn over her savings and property. “Julia becomes the target of a power-hungry preacher with a dark agenda,” said di Marco. “It lends a dystopian element to the story but ultimately Julia solves a crime much closer to home. The events that affect her highlight the evil that can happen when a mob mentality rules.”

One of the reasons di Marco chose astrology is because she is fascinated by the subject. “I’m not a practicing professional, but I have read a great deal. I think of astrology as the next of kin to psychology, a frame of reference useful for character analysis. Not to mention, it’s invaluable for timing and planning events. It just seemed a great choice to create a protagonist who practiced this arcane art, and by virtue of her profession, she’d come in contact with people from all walks of life with all sorts of problems.”

While researching astrology, di Marco discovered an interesting comparison about the charts of Charles Manson and Mahatma Ghandi. “Both men share a difficult Venus-Saturn aspect in their natal charts,” di Marco said. “Obviously, that aspect took entirely different forms in each man’s life. Manson turned to brutal murder while Gandhi led a life of asceticism in an effort to liberate his country. The natal chart is a blueprint of an individual’s intentions in life, but within those boundaries, everyone has a choice.”

The biggest hurdle di Marco faced with The Madness of Mercury was selling the book. “It was an uphill climb,” she said. “Everyone who read it, liked it, but it was rejected several times because no one wanted to deal with the element of a religious cult. One editor even felt the astrology would be ‘too complicated’ for their readership.”

But, as di Marco pointed out, The Madness of Mercury is a mystery, not a study in astrology. “I was surprised anyone would find the subject complicated. I was completely delighted when Midnight Ink wanted to publish this book and this series. Midnight Ink is the fiction imprint of Llewellyn Worldwide, a publisher of many wonderful astrology books! The Zodiac Mysteries truly found its home.”