You are here: Home / One Step Ahead - Featured / Behind the story of Devonshire Scream with Laura Childs
Spread the love 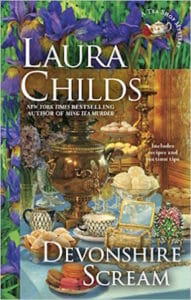 What do Ouija boards, a smash-and-grab robbery, and a children’s ghost story have to do with each other? They’re all elements in the life of New York Times Bestselling author Laura Childs—elements that have led her to where she is today. Childs’ latest release, Devonshire Scream, directly includes only one of those elements, but the other two helped make her who she is today.

Devonshire Scream is a novel about who we should trust. Childs said, “When a crime takes place, when someone is killed, I always want my protagonist to take a cool, careful look at all the people she’s rubbing shoulders with and wonder, ‘Could someone I know have been responsible for this horrible crime? Could someone who comes into my tea shop, who smiles so disarmingly, be a stone cold killer?’ That’s the real fun of writing. Who among my entire raft of suspects is the innocent little rabbit and whose jaws are dripping with blood?”

A dyed-in-the-wool mystery/thriller fan, Childs said that when growing up, she was the kid who snuck into the cemetery at night on a dare and told ghost stories around the campfire. “I devoured Nancy Drew books under the covers at night, loved all the old Charlie Chan movies on TV, and read every Agatha Christie Mystery before I was fifteen. In college I brought a Ouija board into the dorm, pretended to commune with the spirits, and scared the crap out of everybody. I mean, they ran from the room screaming!

I probably read four or five mysteries or thrillers a week.

“I also lived in a genuine haunted house for a while. Today, as a writer of mysteries and thrillers, I’m also a student of the craft. I probably read four or five mysteries or thrillers a week. The first read-through is for pure pleasure, the second read-through is to rip the story apart and analyze it. I want to fully understand how the author constructed his or her novel, see how they created major plot points and plot reversals, built suspense, and how they drove the story to a pulse-pounding climax. Yeah, you can learn a lot from other authors by dissecting their work.”

Childs said she always wanted to be a writer and began at an early age. “When I was six years old, I wrote and illustrated George the Ghost. I worked on school newspapers, wrote little plays, and poetry. After college, I tried writing a novel, but it seemed so overwhelming and I just didn’t have the know-how.” As a result, Childs turned to advertising. (Read about her career in advertising and her Afton Tangler Thriller series in this companion post.)

Despite her successful advertising career, Childs couldn’t give up on her dream of being a writer. She tried one last book, Death by Darjeeling. That book led to thirty-five others, including Devonshire Scream and the robbery mentioned in the beginning. Childs said, “I was thumbing through a copy of Town & Country magazine and noticed this wacky little sidebar about a ‘smash and grab’ robbery that took place in the south of France.

“A daring gang of thieves crashed a stolen SUV through the window of a luxury boutique and made off with millions of dollars worth of diamonds, emeralds, and crocodile handbags. Then, I did some research and found that boutiques in Paris and London had also been hit in similar fashion. It was a regular bling ring! I decided that Charleston, with its upscale residents and fine shops brimming with antiques and estate jewelry, would also be ripe for the picking.”

In typical mystery-writer fashion, Childs decided to raise the stakes even more in Devonshire Scream. “I upped the ante and had the Heritage Society bring in a priceless Faberge Egg for their Rare Antiquities Show. I figured a jewel-encrusted egg would be a delicious incentive for the thieves to stick around and a major hot potato for my protagonist to fret over.”