You are here: Home / Author Interviews / Behind the Goddaughter stories with Melodie Campbell
Spread the love 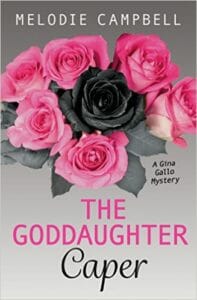 The Toronto Sun has called Melodie Campbell Canada’s “Queen of Comedy” and Library Journal compared her to Janet Evanovich. The winner of ten awards, including the 2014 Derringer in the US and the 2014 Arthur Ellis in Canada, Campbell now has a new release, “The Goddaughter Caper.” This time around, Melodie Campbell is taking on mobsters and retirement homes.

“I write primarily to entertain,” said Campbell. “But, always at the back of my head is the issue: why do we go hard on small-time crooks who break the law, and let rich businessmen get away with doing it big-time? Maybe that’s why I write screwball comedies about an inept crime family.”

In fact, Campbell has a Sicilian background. Does that mean…? “Yes,” she said, “I had a Sicilian godfather. And, yes, I had to wait for certain members of my family to die before I could get the Goddaughter series published. Happily, the Goddaughter books have won two awards.”

So, why did Campbell turn to writing comedy? “For me, it was a way of survival, ever since I was a kid.”

Like many comedians, Campbell had a difficult upbringing. Her only brother is autistic, which made for a difficult childhood. With a background in which she was always trying to reduce the tension, she naturally drifted to comedy.

I learned early that if I could make people laugh, the world was a happier place.

“Our house was often a sad one, and sometimes, even frightening. I learned early that if I could make people laugh, the world was a happier place. As someone more famous than me said: the root of all comedy is tragedy. Humor helps me cope with the burdens of life I can do nothing about. These books are meant to be fun—they’ve been compared to ‘watching a good television sitcom.’”

This is the fourth book in the Goddaughter series and Campbell believes it may be her favorite. “My dad is in a retirement home, and I’ve gotten to know several of the people—some very clever—who live there. That gave me the idea of elderly mobsters retiring to a nursing home, but not exactly giving up their trade. So the Holy Cannoli Retirement Home came about, and Gina, as usual, is called in to bail them out when their latest crazy scam goes whoopsy.”

Melodie Campbell has had a number of diverse careers. She’s been a bank manager, college instructor, comedy writer, and marketing director, She also says she was “possibly the worst runway model ever.”

And then, there’s that once-in-a-lifetime career mistake she still remembers. “In 1993, I had a play produced in Toronto. A producer from HBO was in the audience, told me that I was ‘completely nuts,’ and asked if I’d consider writing pilots for them. I regretfully declined because I had two preschoolers at home. This has to be the worst mistake ever made by someone not legally insane. I mean, who had ever heard of HBO in 1993? Still crying.”