You are here: Home / Author Interviews / Deadly Lullaby — behind the story with Robert McClure
Spread the love 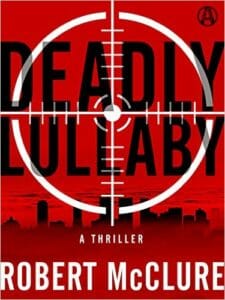 Debut novelist Robert McClure liked to read pulp fiction when he was a kid. Now, after years as a trial lawyer, his debut novel, Deadly Lullaby is being published. McClure has had many of his short stories published and has received some excellent reviews for Deadly Lullaby, but describes himself in terms of his family. Here’s the story behind Robert McClure and his debut as a novelist.

“I’m a trial lawyer turned crime fiction writer, born and raised in Louisville, Kentucky, where I still live. First and foremost, I’m a husband married to the same lovely, intelligent and accomplished woman, Kathie, for 28 years, and a father of two astounding children, Courtney, 25, and Nick, 20. These things compose who I am. Everything else about me is tinsel.”

McClure said Father’s Day may have been the impetus behind Deadly Lullaby. “I wanted to write a father-son story and what I came up with was ‘My Son,’ a short story that was originally published in the kick-ass ezine ThugLit. The story caught the eye of uber-agent Nat Sobel and he contacted me, said he was a fan and offered representation. No one in human history has accepted an offer any faster.”

When McClure and his new agent starting talking, they eventually got around to the subject of long fiction. He said, “Nat read some of my other published shorts and urged me to write a novel, and we kicked around ideas for a month or so. In the midst of all this ‘My Son’ was selected for republication in Best American Mystery Stories 2009, so we settled on expanding that into a book.

There’s a lot going on in Deadly Lullaby—mob politics, violence of all sorts, murder for hire, romance and pure lust

“The father-son story I’ve now come up with is Deadly Lullaby, a work that never would have happened without Nat coaching me through many drafts and never accepting a single sentence he didn’t consider to be the best I could form. The two protagonists in Deadly Lullaby are Babe Crucci, a mob hit man just released from serving his second long hitch in prison, and his son is Leo Crucci, an edgy Los Angeles police detective.”

McClure described the relationship of the characters as estranged—not surprising given that Babe is an ex-con and Leo is a cop. The key question in the story is whether Babe will reunite with his son. McClure said, “There’s a lot going on in Deadly Lullaby—mob politics, violence of all sorts, murder for hire, romance and pure lust—but at bottom it’s a story about a man who loves his son, and a son who’s unsure how to feel about his father.”

Deadly Lullaby is narrated in dual first-person POV for Babe and Leo. The first draft was narrated exclusively in Babe’s first-person point-of-view like the short story “My Son.” McClure said, “The manuscript really sucked. Nat, my agent, agreed with me and strongly recommended I switch to third person POV in order to get Leo’s take on events.”

McClure tried following his agent’s suggestion, but wasn’t satisfied. “I had written the short in first person and had grown attached to Babe’s voice. So, after trying third person for half a draft, I told Nat I was going with the dueling first-person narratives. It was a big decision—to me, anyway. I was this fledgling novelist going against the wishes of a big-time agent like Nat. At first it was tough switching between two voices, discerning their rhythm and flow and making them sound believable. The writing ultimately took flight, so the decision paid off.

Despite his efforts to create the right narrative voice, McClure’s favorite scenes contain no narration. “Five or six chapters sprinkled throughout consist entirely of dialogue between Babe and Leo. They’re face-to-face in the final scene and they have a lot to hash out. I always get emotional when I finish a story well, especially after I’ve struggled through several drafts and realize I’ve finally stuck the ending cold. Ending Deadly Lullaby in nothing but the words Babe and Leo had to say to each other gave me the hugest rush yet in my writing career.”

Learn more about Deadly Lullaby and Robert McClure at robertmcclure.net.