You are here: Home / One Step Ahead - Featured / Behind the story of Dead to the Last Drop
Spread the love 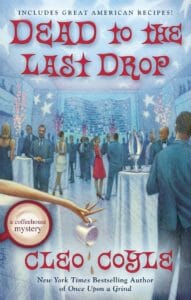 “Dead to the Last Drop” is the latest release in the New York Times bestselling Coffeehouse Mystery series. The series is written by Cleo Coyle, which is a pseudonym for the husband and wife writing team of Alice Alfonsi and Marc Cerasini.

“Dead to the Last Drop” departs from a couple of series traditions. First, this story incorporates elements of a thriller into the traditional cozy mystery genre. Second, the setting is not the usual Greenwich Village, but Washington, D.C. So, why make big changes in a popular series? “Marc and I always look for ways to put pressure on our characters and see how they react,” Alfonsi said.

“For the past several books, NYPD Detective Mike Quinn has been on a temporary assignment with the US Justice Department in Washington. That move for Quinn was a boost to his law enforcement career, but it put a strain on his relationship with our amateur sleuth, Clare, a hard-working single mom who manages a New York coffeehouse.

“The difficulties between Mike and Clare created some interesting twists in our past few murder mysteries, but we felt it was time to put them both in the same city again. So we came up with a plot that moved Clare to Washington for a book, which allowed us to take our longtime readers on an entertaining trip to a new city, introduce some fresh characters—and also take advantage of my knowledge of that town.”

Alfonsi is a former journalist who spent time in Washington D.C. As a result, “Dead to the Last Drop” was the perfect opportunity for a change of venue. It also provided an opportunity to reveal some secrets hinted at in recent Coffeehouse Mysteries. “It [the secrets] gave us a chance to build suspense and curiosity in the reader—and in Clare,” Alfonsi said.

“We’re always looking for ways to put pressure on our characters because it’s when they’re under pressure that readers see what they’re made of. And because our mysteries have been told from Clare’s point of view, the reader has been seeing Mike the way she has, as secretive and troubled. “Now, for the first time in our series, we give readers part of the story from Mike’s point-of-view, which allows him to reveal in his own words why his Justice Department work has landed him in a monumental mess. And his story is a shocker.”

These cities also present a chance to create interesting casts—characters with a diversity in race, culture, and class.

Alfonsi also said that because she lived in D.C., she’d learned to experience its rhythms, understand its quirks, and get to know the people who make their lives there. “I was able to look past a tourist’s knowledge of the place—the museums and monuments and grand history—to find the kind of daily-life specifics that make a story real, like the traffic circles that vex many D.C. drivers; a secret park path that connects two colleges; aspects of federal food service; and the lesser known treasures of Georgetown.”

For “Dead to the Last Drop,” the authors chose to have protagonist Clare Cosi explore some of D.C’s history. Alfonsi said, “Take Cox’s Row, one of the best examples of Federal period architecture in the country. That’s where we put Clare for her Washington stay, in a former ambassador’s mansion rumored to have been part of the Underground Railroad, and just down the street from an address where JFK once lived.

“Both of these cities also present a chance to create interesting casts—characters with a diversity in race, culture, and class. That’s been an important aspect of our series from the start. In both the business-centric Big Apple and the bureaucratic Nation’s Capital, you’ll also find a great diversity in wealth and power. These are towns where average Joes and Janes rub shoulders with the “elite” on a regular basis, on the job, on the street, in restaurants, and…at our Village Blend coffeehouse.”

For more information, visit CoffeehouseMystery.com. Or, click here to download a PDF with a listing of all fifteen Coffeehouse Mysteries.