You are here: Home / Author Interviews / Blessed Are Those Who Mourn- behind the story
Spread the love 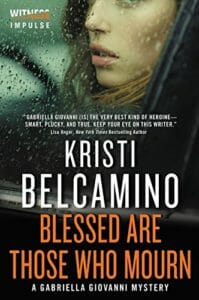 Kristi Belcamino is a Macavity and Anthony Award-nominated author of four crime fiction books, a newspaper crime reporter, and an “Italian mama who makes a tasty biscotti.” In this interview, she discusses her latest novel, Blessed Are Those Who Mourn, and the intense emotions she writes about.

Belcamino claims the main difference between most unpublished writers and herself is that she simply did not give up. She said, “I think my constant efforts and willingness to improve as a writer and my persistence in achieving my goal are why I have four books out in the world. As long as someone is always working to improve as a writer and willing to put up with one hundred plus rejection letters from agents, they will get published, as well.”

Persistence aside, Belcamino also has the creativity to turn an idea into a full-length novel. The idea for Blessed Are Those Who Mourn came  to her while she was writing the second book in the series. “That book included a legend that says people who come face-to-face with a whale will later have a prophetic dream.

“In this case, Gabriella Giovanni dreamed of her unborn future daughter being faced with an evil presence while playing on a beach. I had intended on wrapping up the main thread of the series in Blessed Are Those Who Mourn by having the one man Gabriella had been searching for her entire life reappear. I knew immediately I would tie up the longstanding thread of her past by using the prophetic dream in a future book.”

I don’t think I could write about the terrible things I do without that underlying message of hope existing in there as well.

Intense emotions are what Belcamino likes to write about. In this book, she wanted to show the pain, fear, and joy that are a part of parenthood. “I wanted to attempt to show what it feels like to love another person so powerfully that it is nearly beyond our own comprehension. Of course, in my book, the highs and lows are taken to the upmost extremes, but in some respects, all parents can identify with the sometimes heartbreaking aspects of parenting in the same way they recognize the unbelievable bliss that is also part of having a child.”

Belcamino’s books can be classified as dark crime fiction. Despite that style, she still wants the books to be uplifting and feels she must include a strong message of hope, light, and goodness in her books. “I don’t think I could write about the terrible things I do without that underlying message of hope existing in there as well.”

I was convinced that I was going to die and die badly.

In her own life, Belcamino has experienced firsthand the types of intense emotions she writes about. Of course, there’s the usual emotions everyone feels in life, but she’s also had a couple of very unusual experiences. During a police ride-along she was in the lead squad car in a police pursuit on a San Francisco freeway. She said, “It turned into a heart-pounding-in-your-throat-thrill-ride. I was convinced that I was going to die and die badly.”

She also experienced awe when she flew with the Blue Angels. She said the best part of the flight was taking off because it was the only time she could tell how fast they were going. “Once we were in the air, it was all slow motion because we didn’t have any perspective except the clouds. I had mixed emotions during the flight. It was a combination of being awestruck by the beauty of flying in what felt like Wonder Woman’s plane—it’s an all glass canopy—and the desire to feel better.

“The truth is I was so incredibly motion sick that I spent much of the flight vomiting into little plastic bags and then using twist ties to seal them and then wadding them up and stuffing them in a pocket of my flight suit. I was really ashamed of being so sick until we landed and the instructor told me that ninety percent of the pilots throw up on their first flight.”

Belcamino received a videotape of her flight, which she calls a “barf fest.” She said, “It’s a hoot to watch because I had no idea I was being filmed.” Who knows, perhaps someday that experience will make it into a book.

Learn more about Kristi Belcamino on her website at kristibelcamino.com.