You are here: Home / Author Interviews / The story behind The Black Velvet Coat by Jill Hall
Spread the love 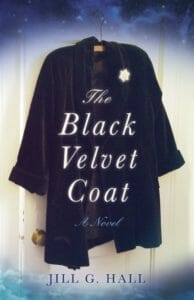 Jill G. Hall is a former teacher turned artist and writer. Her debut novel is “The Black Velvet Coat,” which is about two women separated by time whose lives intersect and are both forced to face their fears to realize their full potential. In addition to her writing, Hall was a teacher in inner-city public schools and has been a San Diego artist for a decade.

“I write very intuitively,” said Hall. “However, after I finished ‘The Black Velvet Coat,’ I realized one of my main messages came from my work facilitating creativity groups with people trying to find their paths toward fulfillment. I’ve found that it isn’t always easy to determine what you really want but if you keep searching with an open heart, start on the road and stay on it you can reach your dreams.”

The idea for the novel came to Hall when she saw a coat similar to the one in the novel at a yard sale. “I kept thinking it was too fancy and passed on it. That night I dreamt about it and early the next morning I knocked on the neighbor’s door and then it was mine. Shortly thereafter it showed up on my writing practice pages with Anne, a San Francisco artist buying it in a thrift shop and ‘The Black Velvet Coat’ was born.”

The connection between the two begins when Anne sees a vintage photograph taken of Sylvia and decides to solve the mystery of what happened to the young heiress decades before.

Jill G. Hall said she’d been a mosaic artist for over ten years when she decided to branch out and dabble in collage. “I signed up for a class and the instructor told us our work for that session needed to be text-based. I was really stumped but then realized I was writing a novel and had oodles of text to choose from. Searching through the pages I pulled out some of the most dramatic lines to use and had a blast making pieces with those incorporating vintage postcards, magazine photos and even some found objects to create assemblages.”

While making those choices, Hall studied the postcards and photographs, and the process helped her to add depth to her writing by describing the details of the art pieces. Her two characters are Anne and Sylvia, a present-day artist and a young heiress from the 1960s. The connection between the two begins when Anne sees a vintage photograph taken of Sylvia and decides to solve the mystery of what happened to the young heiress decades before.

“We are in exciting times when women can have more than one occupation throughout their lives. I enjoyed writing the contrast between the lives and time periods of my two main characters. Someone recently asked me if I had fun doing the 1960s pop culture research for my book. And I said, ‘Honey! I’m sixty years old and grew up in the 60s. I did very little research. Most of it came right from my memories.’”

Hall also said there were surprises during the writing of “The Black Velvet Coat.” One of those involved a mischievous puppy she wrote into the book. “It was strange because at that time I wasn’t much of a dog person. She was named Lucy, had a long body, droopy ears and blinking eyes. She was so real to me that I just had to find her.”

In fact, Hall and her family searched at animal rescues and the humane society, but couldn’t find the puppy. “Then one day, on our way to the hardware store, we walked by a pet shop and there she was in the window looking up at me.” Hall knew immediately that she’d found Lucy. They took the dog home and the beagle-bassett has been a part of their family for more than ten years.

For her next novel, Hall will be stepping back further in time. She said, “It’s about a 1920s New York debutante who loses it all in the stock market crash and becomes a burlesque dancer to save her family and herself. I still take tap dance lessons and definitely am incorporating my own experiences into her story.”

Learn more about Jill G. Hall on her website at jillghall.com.