You are here: Home / Author Interviews / Sudden Justice — going behind the story
Spread the love 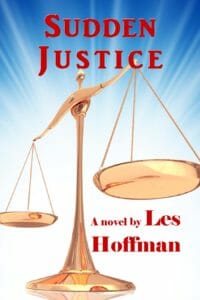 Les Hoffman is a retired research executive, a licensed Professional Engineer, and an amateur actor and boxer. In Sudden Justice, Hoffman’s debut novel from Dark Oak Mysteries, Hoffman couples his technical, stage, and fighting experience with a passion for American heroism.

“I am a lifelong fan of the action/adventure genre, and believe I understand what is important to the reader,” said Hoffman. “I believe in the American Dream, and the tremendous strength we derive from the diversity of our people and the equality of opportunity that we strive to achieve.”

There are times, however, when Hoffman sees an inequality in the foundation of our society. “Most people like to believe that they can always turn to the law to protect themselves in an unjust situation. Civilization rests on the rule of law, so an attack on the fundamental principle of due process is unsettling, representing an attack on our way of life.”

These situations represent a valid, ethical challenge to the rule of law for every circumstance. They are the driving force of vigilantism.

What happens when one can’t turn to the law? Hoffman said, “On the one hand, taking the law into one’s own hands is a violation of the fundamental due process principle that allows us to thrive as a society.  Who among us is wise enough to replace the checks and balances of judge, jury, and executioner? On the other hand, there are many situations where the law is inadequate to correct an obvious injustice. These situations represent a valid, ethical challenge to the rule of law for every circumstance. They are the driving force of vigilantism.

“Although we can always strive to improve and evolve our laws, there never will be a system that will deliver justice in every instance.  By extension, there will always be a role, arguably a need, for vigilantism.”

Les Hoffman also said he’s always enjoyed stories about bold people who make a difference on their own. “Particularly, I’m an admirer of heroes who risk personal danger to help others.  Overseas, this might be called a ‘cowboy mentality.’ Whatever you call it, it’s a real thing, and it’s found more in this country than anywhere else in the world.

“I’ve written Sudden Justice with a bit of a twist on the vigilante theme. The protagonist, Bryce Daniels, is a family man with a unique skill-set with which I am somewhat familiar.  In addition to his physical abilities, he is a master of disguise and deception, and an engineer by vocation.  These capabilities provide a fertile toolbox of options to tackle the variety of challenges he faces.  My background as an amateur boxer, actor, and Professional Engineer help provide a realism to the story.”

During his days as an engineering professional, Hoffman focused on technical writing. He’s happy he can now spend time fulfilling his creative side. “In addition to writing fiction, I have performed in a number of live theatre productions in the surrounding communities.  The ability to empathize with a wide variety of characters is something that is germane to both pursuits.  I find it very stimulating. My wife always tells me how energized and upbeat I am after a writing session. You can’t put a price tag on that.”

Hoffman chose his protagonist’s skill set based on his own. He did the same for another character introduced in Sudden Justice. The character’s name is Holmes and he’s a very large, intimidating male German boxer.

Hoffman said, “We actually have three female pet boxers at home, including one named Holmes.  They are all American Boxers, which is a much smaller breed than the commonly known German Boxer.  Holmes was our first ‘small boxer’ after many years of German boxers.  When we got Holmes we were not aware there was a smaller breed, and thought she was a genetic anomaly.  We nicknamed her ‘Baby Holmes.’  She is also the sweetest dog we’ve ever had.  These attributes are in direct contrast to her rough and tumble male namesake in Sudden Justice.”

For more information about Les Hoffman or Sudden Justice, visit him on Facebook.