You are here: Home / Author Interviews / Greenfellas — Robert Lopresti says it has issues
Spread the love 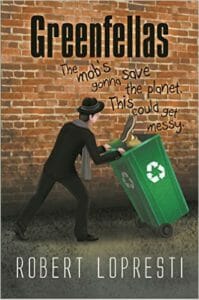 Robert Lopresti spent his first three decades in New Jersey. Lopresti is the author of more than fifty mystery short stories, which have been published in Alfred Hitchcock’s Mystery Magazine,  Ellery Queen’s Mystery Magazine, The Strand, and numerous anthologies. Lopresti hadn’t written a full-length novel in more than a decade when a hurricane and environmental students inspired him to write Greenfellas.

“I am half-Sicilian,” said Lopresti, “but the closest I have to a mob connection is a great-grandfather who traded his ice cream parlor for a career in bootlegging.” Why would a writer without a mob connection choose to pen a mystery in which a mobster is the hero? The answer is Lopresti wanted to write what he calls a comic crime novel—with issues.

“When I started writing Greenfellas, my home state of New Jersey, which is where the book is set, was getting clobbered by Superstorm Sandy. A relative of mine drove to the shore most days for months to help those made homeless until he suffered what sounded to me like Post Traumatic Stress Syndrome.”

Lopresti disagrees with those who deny climate change exists. “I’m no scientist but 90% of climate researchers who have written on the subject say it is real, and that sort of majority tends to win me over.  You can argue that any one strange weather event is not related to climate change, but have you noticed how many of the damned things we’ve had lately? It seems to me the system that’s supposed to address this sort of problem isn’t working.  I wanted to explore some aspects of that and see if I could find a hint of a solution.”

As an environmental-sciences university librarian, Lopresti does a lot of work with environmental students. He said, “These kids are an inspiration.  They see the problems more clearly than most of us—they are out there in the woods, mountains, and oceans dealing with them. But, they remain cheerful, optimistic, and determined to make a difference.  I am delighted to help them with finding resources and improving their papers, but I wished there was something more I could do.”

With that desire to make an incremental difference, Robert Lopresti considered his options. “I write on my lunch hour almost every day,” he said. “The result has been more than fifty published short stories, but I decided to take a shot at a novel.”

When Lopresti began, he had only brief titles for four sections of Greenfellas and wrote by the “rising mountain method.” He said, “I started with the scenes I knew best—the highest peaks—and let the structure reveal itself as if the ocean was receding, revealing a long mountain range.  One of the big breakthroughs came when a friend told me about a disastrous gathering his son had been to in New Jersey.  ‘Wouldn’t it have been funny if the mob had been involved?’ he asked. Well, he was right.  So I rebuilt it around my gang of Mafiosi.”

For Greenfellas, Lopresti said he sent his mobster hero to an ecology professor to get an overview of the issues. He said, “I explained the premise to three professors at my university and asked what they would tell my hero.  I mashed their answers together with my own screwy views and that was the advice my hero received.”

For more information about Robert Lopresti or Greenfellas, visit his website at Roblopresti.com.