You are here: Home / Author Interviews / Back to the 60s with mystery writer Kay Kendall
Spread the love 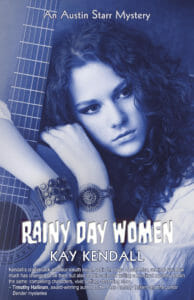 The 60s were a time of turmoil, filled with such diverse events as the Vietnam War and Woodstock. Among the baby boomers to grow up during the era was Kay Kendall, author of “Rainy Day Women.” If the title sounds familiar, it’s because it comes from a Bob Dylan song. Kay Kendall said all three of her Austin Starr mysteries bear the titles of Dylan songs.

“The times we grow up in help shape us,” said Kendall. “I am a child of the sixties, and enough time has passed since then to allow that era to be considered historical, even though some of us boomers can remember it. Many issues that were relevant in the sixties are still current today.”
Kay Kendall said she planned her first three Austin Starr mysteries so they would deal with issues which were dramatic back at the time, yet still relevant today. Kendall said, “In ‘Rainy Day Women’ murder stalks women’s liberation groups in Vancouver and Seattle in 1969.

“My amateur sleuth Austin Starr shows herself to be a middle-of-the-road type person, trying to understand and to make her way through the turbulent times she lives in. When Austin looks for the person who is killing feminists in ‘Rainy Day Women,’ she learns about the women’s movement by interviewing people caught up in it. The reader can decide which political or social positions he or she most agrees or disagrees with.”

Kay Kendall said she became involved in what has come to be known as second wave feminism. Her involvement has changed Kendall’s life. “I have known for a long time that I wanted to write about that movement, but the urge was pushed along by attitudes of young writers in my critique groups. One female college student was astounded when I read passages from my work that had male and female characters acting in ways that were common in the sixties but less so now. She said, ‘It’s a good thing I didn’t live back then. I’d have smacked him.’”

What novel about the 60s would be complete with at least one hippie?

What novel about the 60s would be complete with at least one hippie? Kendall said, “The first agent I pitched my debut mystery to at a writers’ conference appeared to be in her mid-twenties.  She knew very little about the 1960s, but was nevertheless interested in my book. ‘Will your story include hippies?’ she asked. ‘Because I really love hippies.’ So I agreed that—yes indeed—I had included such characters, then rushed home and added a shaggy couple with a baby, making them prototypical in their hippie-ness.”

Kay Kendall, who has degrees in Russian history, said she also likes having an international flavor in her novels. To help enhance that flavor, promises to always have Russian characters in her books. She also chose Canada as the setting for the first two. Having a Canadian and lived in the country for many years, the choice seemed natural to her. “I wanted to show Americans the differences between the United States and Canada are real and do exist. Our neighbor to the North is not synonymous with the fifty-first state.”

Before she was a writer, Kendall came from an advertising background. In fact, she was on the team that launched the worldwide publicity for the first McDonald’s in Moscow. “On January 31, 1990, McDonald’s opened its first restaurant in Moscow, serving 35,000 customers the first day. Media monitoring showed more than half of the world’s population (at the time five billion people) knew about this.”

At the time, Russia and the West had not yet ended the Cold War. The Berlin Wall would not fall until November 9 of the same year. Kendall said, “To see a capitalist McDonald’s located a mile from the Communist Kremlin was incredible. After I participated in that project, I said that my tombstone should read, ‘She did worldwide PR for Moscow McDonald’s.’ Because I studied Russian history and knew the language, I comprehended how significant the sale of Big Macs in Russia was.”

There are two YouTube videos that provide insight into the events. The first video can be found here. A second video of the opening, in which Kendall makes an appearance in the front window, is here.

“I’m inside the restaurant looking out,” said Kendall. “I’m the blonde in a black suit carrying a clipboard at the 22 second mark. My team was making that giant red bow the day before when the secret police informed us that Chechen rebels were in the city. They had a nuclear weapon in their van and planned to disrupt our opening while so many international film crews were present. We were jittery but pressed on—proving once more that all’s well that ends well.”

Learn more about Kay Kendall on her website at kaykendallauthor.com.