You are here: Home / Author Interviews / Go behind the story with Brad Meltzer
Spread the love 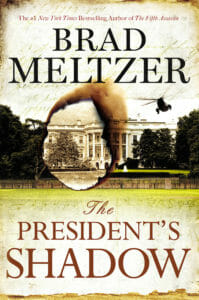 Beecher White returns as the protagonist in “The President’s Shadow,” which is the third Culper Ring novel. Meltzer describes Beecher as an ordinary guy who is exceptionally smart. Beecher fans might be disappointed that Brad Meltzer’s next novel won’t be about Beecher. That disappointment need not last long. “I’m going with a brand new character because I always want to come back with something fresh and new,” Meltzer said. “But, you better believe I want to bring Beecher back.”

“The President’s Shadow” began with what Meltzer calls a nugget. “I can’t even tell you where it came from, but it was the First Lady, in the Rose Garden at the White House, reaching into the dirt under the mulch and finding buried in the Rose Garden a severed arm. That image and the idea that she didn’t know who this arm belonged to stuck with me. She didn’t know how someone put it there or how they got it past security. And, she certainly didn’t know the puzzle that was hidden inside that severed arm’s fist.”

Meltzer knew he had a compelling start when his wife read the concept and said, “This is one of those moments when you’re scaring me.”

For Meltzer, though, that nugget was only the beginning because he wanted “The President’s Shadow” to be about personal transformation. He said, “Over the past two books that I’ve been writing, I lost my mother and I lost my father. Both passed away and I think the last two books were really just me struggling to deal with that loss. When you lose your parents or you lose a significant person in your life, you really have to transform yourself.

“You almost become a different person because you have to fill those holes that are our lives. I knew that that’s what this book was going to be about. All the main characters face that transformative moment where you see some heroes become villains and you see some villains become heroes. That’s just how we are.”

Once he’d decided on transformation as the book’s theme, Brad Meltzer began researching great transformative moments in history. “One of my favorite was with the killers of Abraham Lincoln. Dr. Samuel Mudd was one of the killers of Lincoln. He killed the greatest president of all time, got put in jail forever, and they took him to a secret island south of Florida that almost nobody knew about.

“On this island, in this secret space that housed Abraham Lincoln’s killers, Dr. Mudd went from becoming an awful person to actually saving everyone from an epidemic. He became a hero. And when I found that story, I realized that this island of transformation was just going to be vital to the plot of ‘The President’s Shadow.’

“I struggled personally for a long time with how I was going to honor my parents and whether they would be forgotten. I finally realized they deserve to be remembered. They deserve to be missed. They earned that spot and that’s not a bad thing. It’s okay to miss someone in your life and to think about them.”

Despite that personal struggle, Brad Meltzer maintained his writing pace, style, and fan base. That fan base includes people in all levels of government, up to and including US presidents. As a result, Meltzer has access to details that delight readers who crave authenticity in their fiction. Those details include the fact that Ronald Reagan sometimes carried a gun in his briefcase. They also include Meltzer’s knowledge of secret rooms beneath the White House. Meltzer prides himself on being able to share such details with his readers.

“I love that the book is fiction, but the details are real,” Meltzer said. “When you see the secret room below the White House that’s below the basement, you realize that there are almost as many rooms below the White House as there are in it. I love that you get to see those details and that you get to see Mount Weather and some of the locations at Mount Weather, which is one of the secret locations the Department of Homeland Security still uses as a safe house for the President in case something bad happens.

“I also love that I get to take you inside Secret Service Headquarters in Washington, DC, and you get to see the world there. And, to me, especially the details involving the death of Abraham Lincoln or what happened to his killers or where they were really taken and stored—I love that you get to see things that happened in real life.”

Things went very differently than Meltzer expected, however. He met with an agent who had read and liked “The Tenth Justice.” The agent agreed to help him with research, which was what Meltzer describes as “just a lucky moment.” Now, the Secret Service has helped him with a half dozen books. Meltzer said, “The reason I think they do it is because I take their trust very seriously.”

To Meltzer, that is the fun of what he does. He sees the Secret Service as being made up of ordinary people willing to help effect change in the world. Meltzer said, “I love getting to use these novels to show people their real power.”

Learn more about Brad Meltzer on his website at bradmeltzer.com.

What: This month, Brad is giving away two hardcover copies of “The President’s Shadow” and I’m adding two $5.00 Starbucks gift cards. Two random entries will be chosen as winners. Each winner will receive a book and a gift card.

When: Contest closes at 12:00 a.m., July 14. Winners will be selected on Sunday, July 14. Selected winners must claim prizes within 72 hours of notification.

Verification of entries: All winning entries are subject to verification.

Due to an error in the newsletter mailing, I providing The Snitch Bonus Code. Rather than send another email, I’m going to provide it to everyone this month. Next month, it will be back to business as usual and only The Snitch subscribers will have the code.