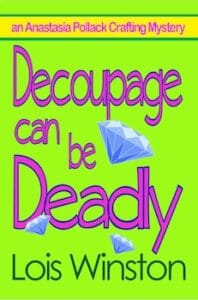 “Anastasia Pollack,” said Winston, “works at a women’s magazine that features pop culture and trends. So I’m always on the lookout for new ones that I can incorporate into my stories. There are often social issues that crop up with trends (twerking, anyone?) In ‘Decoupage Can be Deadly,’  the story involves celebrity divas and the new fashion trend of Vajazzling. If you’re curious as to what Vajazzling is, read the first chapter of Decoupage Can Be Deadly on my website: http://www.loiswinston.com/booksap6.html.”

Because Winston’s sleuth lives with both her semi-invalid communist mother-in-law, her widowed DAR member mother, and her two teenage sons, she says she’s “always tackling issues that involve the ‘sandwich’ generation.”

The idea for the series came to Winston when she faced one of the very real issues many people face today, the loss of her husband’s job. “It was a scary time,” said Winston. “I channeled my fears into my writing and came up with Anastasia. She thought she was living a typical middle-class life until her husband died suddenly, and she discovered she was married to a closet gambler who left her deeply in debt. Throughout the series, she moonlights to make extra money to pay down that debt. I’m happy to say that my own husband, thankfully, is not a gambler and nothing like Anastasia’s dead louse of a spouse, but his mother was a communist. Lucille, Anastasia’s mother-in-law, is reminiscent of my own mother-in-law.”

The Anastasia Pollack series obviously hits close to home for Winston, which raises the question, are she and Anastasia exactly alike? “People have asked me if I’m Anastasia. Although we share a similar background, aside from both of us having two sons and a communist mother-in-law, we’re nothing alike. Anastasia is much more daring that I’d ever be. Dead bodies? I’d run the other way as quickly as possible, not poke around trying to ferret out a killer. I also have much more self-control when it comes to sweets. However, never leave me with a bag of pretzels or a loaf of fresh sourdough bread!”

Winston, who is also published in women’s fiction, romance, romantic suspense, and nonfiction under her own name and her Emma Carlyle pen name, says she never expected to be writing comedy. “I’m one of those people who can’t tell a joke without messing up the punch line. I started out writing very angst-ridden, emotional romantic suspense. However, when my agent suggested I try writing some chick lit back in the early 2000’s, I discovered I had a humorous writing voice hidden within me. I’ve always loved books that made me laugh. So finding that I could write books that made other people laugh was a pleasant surprise. After chick lit waned and I began writing an amateur sleuth mystery series, it seemed logical to write the series employing that humorous voice.”

Humor is one of the tools Winston sees as most helpful in dealing with difficult issues. She said, “I believe that when we’re faced with seemingly insurmountable obstacles, we have choices—we can either curl up into a ball and bemoan our fate or tackle our problems head on. How we confront the stress in our lives says a lot about us. I’ve heaped a lot of crap on Anastasia, and she often bemoans her fate. But, more times than not, she confronts her problems with sass and a sense of humor that helps her plow through even the toughest of situations. I’m a firm believer in laughter being the best medicine. The Anastasia Pollack Crafting Mysteries are humorous novels. I hope I not only give my readers an enjoyable story and a mystery that will keep them guessing whodunit but a few good laughs along with way.”

“Assault With a Deadly Glue Gun” was the first book in the Anastasia Pollack series. The book received starred reviews from both Publishers Weekly and Booklist. Visit Lois at www.loiswinston.com, visit Emma at www.emmacarlyle.com, and visit Anastasia at the Killer Crafts & Crafty Killers blog, www.anastasiapollack.blogspot.com. Follow everyone on Twitter: https://twitter.com/Anasleuth.