You are here: Home / Archives for Big Island

Our trip to South Point was filled with wonder and unnecessary stress. The wonder was due to the incredible landscape where we crossed through lava flows, then back into forest, and back again. The stress was the needle on the gas gauge dropping faster than I’d expected.

We can chalk the stress up to “different car syndrome” or, if you’d prefer, bad judgment. Either way, we were rapidly approaching what I called “the point of no return”—that halfway point on a journey where you know you can get back as long as you make an immediate U-turn—when we found a station in Ocean View.

From that point forward, the trip was stress free and the wonder at nature’s power took center stage. I hope you enjoy the photos of our journey that was South Point or bust!

The road to Kona from Waimea takes in many changes in scenery. Most of the tourists probably make the drive using the Queen K Highway, which is shown on maps as Highway 19. That coastal route has some of the same changes in scenery seen along the Hawaii Belt Road, but also misses some of the beauty of this inland route.

From the rolling hills of the upcountry to the lava flows scarring the center of the island to the lush country surrounding Kona, the inland route is missing only one thing—the traffic. We traveled this route at midmorning and were pleased to see very few cars. It made for a peaceful drive through some amazing country.

On the Big Island, they call this part of the island Upcountry. It’s home to beautiful Rolling Hills, cattle, cowboys, and incredibly friendly people. During our two-day stay in Waimea, which is also known as Kamuela, depending on who you happen to be talking to at the time, we discovered that upcountry also has some excellent restaurants. One in particular, Merriman’s, has a five-star rating and food that is rumored to be among the best on the island. Sadly, we didn’t make it to Merriman’s before the end of our short stay.

At the other end of the spectrum is a little cafe known mostly to locals, the Hawaiian Style Cafe. This is an old diner complete with a large counter where the locals assemble for breakfast. Their food? Incredible. Service? Very friendly. And, if you have food allergies, they’re very helpful.

We had enough time to visit the Parker Ranch Visitor Center, which gives insight into the history of the industry that shaped the upcountry. Parker Ranch began in 1847 when John Palmer Parker assisted King Kamehaha I by ridding the island of feral bulls. The grateful king granted land to Parker, which he used to start a cattle ranch that eventually grew to more than 250,000 acres and made it the largest cattle ranch in the US. While the ranch is much smaller today, it’s influence can be seen everywhere upcountry.

Are you thinking of a trip to the Big Island? One word of caution, upcountry is not a popular tourist destination like Volcanos National Park, the Kohala Coast, or Kona. What you will find, however, is time to decompress in a place where the hustle and bustle of the world is replaced by cool nights, fabulous scenery, and peaceful surroundings. For writers and artists especially, a few days upcountry just might be a dream come true.

What two things are guaranteed to never show up on a bucket list? First, how about becoming the victim of a natural disaster? Nobody wants that. But, if that disaster does strike, the next item guaranteed to be on that list is having someone scam you while you’re trying to recover.

One of the side effects of Tropical Storm Iselle was to provide an early reminder that the people who make a living by taking advantage of others are alive and well, even in paradise. A scant two weeks after Iselle pounded areas of the Big Island of Hawaii in early August with over four inches of rain per hour and high winds, Hawaii Electric Light reported that customers were being called by someone claiming to be a claims representative of the company. The caller was reportedly asking for social security numbers to expedite claims.

The main point to take away from this example is that no matter what disaster occurs, no service provider, legitimate company, or charitable organization is going to be calling or emailing to ask victims for personal information. Sadly, in the heat of crisis, we tend to want to believe even in small miracles. That “miracle” might come in the form of a call or email saying help will be on the way after the caller provides a few personal details. Nothing could be further from the truth, but plenty of people still fall for this scam.

Here are six tips to keep in mind should that terrible day arrive: 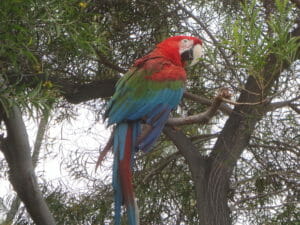 The Mauna Kea Resort on the Big Island is an example of pure wow. Even the grounds are lush and beautifully manicured. With artwork scattered throughout the grounds, the resort feels more like a “tropical experience” than a place to stay. Not much has changed since the last time we were here, which has been many years. The resort still looks as good today as it did on our previous trip.

We did not stay at the resort, but did make a trip there because I have a few scenes in “Big Island Blues” that will occur at the resort. Access to the grounds is somewhat controlled via a checking process at the main gate. The security guard asked why we were there, then explained that we must—yes, must—use valet parking. Interestingly enough, when I tried to bypass valet parking for the lot where there is public beach access, I was turned away and instructed to use valet parking. Ah well, I tried.

In typical Hawaiian-resort style, there aren’t really any “interior” public areas at the entrance. The architecture definitely lends itself to the use of planters with large palms and other tropical foliage. For this post, however, we’re going strictly with the grounds. So, sit back and enjoy a virtual trip to the Mauna Kea Resort grounds. No parking hassles here. This is definitely time for “no worries.” 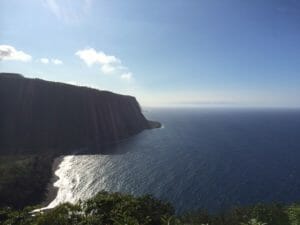 Last week’s post, The little Hawaii town with two names, took us to the Jacaranda Inn and the little town of Waimea. By the end of our second day, we’d completed the background research for that area and had a little time to kill. It was time to take a drive and play tourist.

The drive began in town on the Mamalahoa Highway. The scenery in this area is filled with big trees and rolling hills. It’s absolutely stunning and the fifteen miles to the turnoff for Honokaa came quickly. We’d never come this way before, so we were delighted when we arrived in Honokaa and discovered it’s an incredibly quaint town. The draw of the town was strong, but we resisted and continued on our journey to see the Waipio Valley.

There’s no direct route to Waipio Valley from the Mamalahoa Highway, which means you must backtrack about eight miles on Waipio Road. The drive, however, is easy and the views at the end are stunning. The hike down to the lookout and restrooms is short, but steep. At the base of the hill, there are a series of signs describing the valley, a picnic area, and the biggest surprise of all, restrooms with running water.

I hope you enjoy the photos as much as we enjoyed the trip. It was well worth the drive.