You are here: Home / Reviews / Review of The Golden Tresses of the Dead
Spread the love 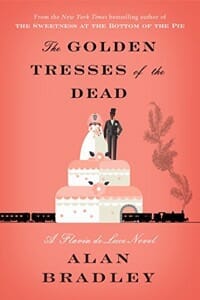 From the publisher of The Golden Tresses of the Dead

Although it is autumn in the small English town of Bishop’s Lacey, the chapel is decked with exotic flowers. Yes, Flavia de Luce’s sister Ophelia is at last getting hitched, like a mule to a wagon. “A church is a wonderful place for a wedding,” muses Flavia, “surrounded as it is by the legions of the dead, whose listening bones bear silent witness to every promise made at the altar.” Flavia is not your normal twelve-year-old girl. An expert in the chemical nature of poisons, she has solved many mysteries, sharpening her considerable detection skills to the point where she had little choice but to turn professional. So Flavia and dependable Dogger, estate gardener and sounding board extraordinaire, set up shop at the once-grand mansion of Buckshaw, eager to serve—not so simple an endeavor with her odious little moon-faced cousin, Undine, constantly underfoot. But Flavia and Dogger persevere. Little does she know that their first case will be extremely close to home, beginning with an unwelcome discovery in Ophelia’s wedding cake: a human finger.

The Golden Tresses of the Dead is a delightful mystery driven by the strong narrative voice of Flavia de Luce, a precocious twelve-year-old sleuth and chemist. One of the beauties of Flavia is that she is as naïve as she is astute. Her naivete creates a wonderful narrative, during which she may wax profusely about a new discovery or concern.

This is definitely a mystery in which the detectives, Flavia and her adult partner Dogger, detect. The pace remains fast as they chase down clues. Flavia’s methods are sometimes unorthodox, but they are effective and create a fun read. Her exploits are always focused on the crime she and Dogger are investigating, which makes for a book difficult to put down.

This is a cozy mystery fit for all audiences, from young to old. It’s filled with good dialogue, a clever plot, and quirky characters. Add to that a protagonist with the enthusiasm of youth and this is a sure winner in the genre.